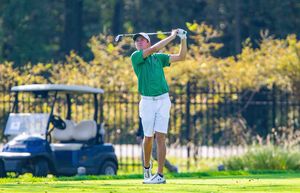 Hunter Ostrom has gotten off to a stellar start in his sophomore golf season, winning the individual Northern Intercollegiate Championship this past September. Ostrom has always been a reliable team player: his 73.53 career stroke average ranks sixth all-time and his 72.33 fall average during this year ties for third best. This victory, however, was even sweeter considering that it was his first tournament crown.

Interestingly enough, Ostrom wasn’t even sure he would be able to com- pete in the championship. A self-described “off week” in his game almost jeopardized his spot in the competition. Due to a bout of luck, however, Ostrom was able to attend the Northern Intercollegiate. Ostrom credits his focused and dedicated performance to “managing to stay off his phone and not looking at any of the scores or leaderboards,” his way to avoid psyching himself out. Ostrom admitted to not even knowing his standing toward the end of the competition. He was very pleasantly surprised to learn right before his last hole that he was still under par. On top of securing his win for the Individual Northern Intercollegiate Championship, he also managed to pull off a 54-hole tournament career-low of 210 (-6).

Ostrom discovered his passion for golf very early on in his life, when his dad first exposed him to the sport around two years old. Ostrom fondly reminisced on how he had been playing golf ever since he could walk. After quickly realizing his skill for the sport, Ostrom says the opportunity for competition drew him in even further. He came to appreciate how “indi- vidualistic the sport is. Everything is based off of how I hard I push myself to work.” His pre-college golfing career stood testament to his dedication and accomplishment. During high school, Ostrom was the Idaho State High School Champion in both 2013 and 2015 and won the Idaho State District Championship in 2014 and 2015.

Ostrom committed to Notre Dame during his junior year of high school. He had always wanted to play college golf, so it was a dream come true to be recruited. When asked what his single biggest accomplishment was, Ostrom responded, “Winning the Intercollegiate Championship this year.” How- ever, he made a point to emphasize the distinction between this accomplish- ment and his greatest success, which he names “being here at Notre Dame.”

Reflecting upon his goals for the season, Ostrom claimed that his main objective was to “win this season, so I already got that one out of the way.” More importantly he added, “I want to win again.” Ostrom hopes that if he can place at another competition, it will solidify his first victory.

The men’s golf team has six main events in the spring and five events in the fall, the last one being the Quail Valley Collegiate on Oct. 16. Ostrom uses the men’s off-season, spanning from the end of October to the beginning of January, to recuperate and take a much-needed break from competitions and routine practices. However, Ostrom still emphasized the need to practice and fine-tune his skills in order to prepare for the spring season opener, The Prestige, hosted at Stanford in February 2019. With the spring season still a few months away, Ostrom is happily appreciating this offseason break. Following his excellent performance and accomplishments in the 2018 fall season, Ostrom approaches the offseason with a positive mindset, ready to get back to work in the spring.