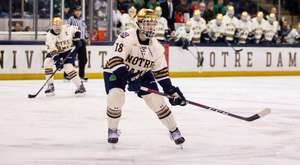 In the summer of 2015, rising college freshman Jack Savage and rising sophomore Nick Savage consumed oxycodone and alcohol at a grad party, and then went home and went to bed. When their mom woke up the next day, both were dead.

Notre Dame hockey junior forward and South Bend native Graham Slaggert knew both, having grown up playing hockey with them. Since their death, he has worked with the Savage family to raise awareness about drug misuse through the 525 Foundation, a charity the family started themselves. He continues to keep the brothers with him in memory and through commemorative attire both in and out of the rink.

The 525 Foundation aims “to prevent another family from having to endure the pain of such a tragedy through outreach, education and support,” according to their website. As part of their programming, the parents speak to schools and groups all over the country about prescription drug misuse.

“It just kind of shows how fragile life is, and it was eye-opening to me. I remember it was in the summer, so I was sitting at the hockey rink and you see it on Instagram. You don’t really believe it,” Slaggert said. “We thought it was fake.”

At Notre Dame, he has worked to keep their memory alive in the South Bend community by adding pill drop boxes to hockey games and designing commemorative jerseys to raise money.

“I always had that idea that I wanted to do this,” Slaggert said, referencing his desire to design a commemorative jersey.

“When I got here, I talked to our club manager and I said, ‘Hey, this is what I want to do. This is who I want to do it for,’” he explained. “He was super supportive, so I brought in my jersey that I wore when I was still playing in South Bend and I said, ‘Can we mimic this jersey as much as possible?’”

The commemorative jersey, which sports a shamrock on the shoulder and the 525 Foundation logo inside, replicates the jersey that he and the Savage brothers wore when they played for the Irish Youth Hockey League (IYHL).

The Notre Dame hockey team’s version debuted at a game against Minnesota on Feb. 15, 2020. Slaggert hoped that it would show local children the connection between Notre Dame and South Bend’s IYHL and raise awareness about drug abuse and the 525 Foundation.

“The relationship I have with the Savages and 525 is one that’s not gonna end with that jersey auction. It’s going to go on for many, many years to come,” Slaggert said, emphasizing the connection that he shares with the family. “They have four boys and my family has three boys. They all play hockey; we all play hockey. So, we grew up together very close with the Savage family and our paths cross a lot.”

Slaggert also wears a rubber bracelet, designed by Jack and Nick’s younger brother, in memory of them. When he moved away from home as a junior in high school to play with the national team, his new coach made him put the bracelet in a non-visible place.

“I actually put it in my shoulder pad in my hockey gear. And since then, it’s always been with me when I’ve been on the ice. So I guess it’s like a cool thing that I’ve still done, and just always, legitimately almost every step on ice that bracelet’s been with me.”