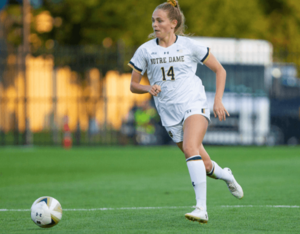 In the second game of the season, Eva Hurm broke the scoreless tie with a move that is rarely seen in soccer: an unassisted goal off of a corner kick. She would not stop there, as she went on to add another goal and assist as the Irish defeated Northwestern 4-0.

Hurm is a junior forward who is looking to take the next step this year after a sophomore season in which she started in all but one game. In her sophomore season, she tallied three goals and eight points in a season which the Irish finished 8-10 and failed to make the NCAA tournament for the first time since 1992.

Hurm is not used to losing games let alone finishing with a losing record. She attended Northern Highlands Regional High School in New Jersey, where her team lost only four games out of 95 they played.

During Hurm’s senior year, she lead the Highlanders to a state championship and was named Big North Conference Player of the Year and nominated for Gatorade Player of the year in New Jersey. She finished her high school career with 53 goals and 39 assists.

For Hurm, attending Notre Dame is part of longstanding family tradition. Hurm will be the 14th member of her family to graduate from the university in the last 70 years.

Though she has been an active member of the team recently, Hurm was sidelined with an injury for most of her freshman year. She was still able to finish the season with a goal and five assists in 10 appearances.

The women’s team is now 6-2 on the season with clean shin five shutouts games.

The Irish start ACC play on Sept. 20 when they travel to Clemson, who is ranked No. 20 in the United Soccer Coaches Top 25 as of Sept. 12.