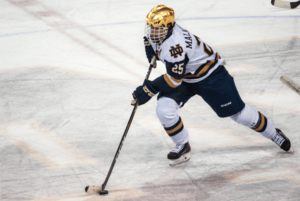 Senior forward Dylan Malmquist has had a solid run this 2018-2019 Notre Dame hockey season. Malmquist started off the season with a strong performance against Mercyhurst, tallying one goal and three assists. But in his last five games, the alternate captain has netted two goals and four assists on 12 shots. Malmquist scored both of those goals on Jan. 25 against Michigan State, scoring the first of the game with only three minutes left in the opening period.

Malmquist’s signature Notre Dame memory, though, was during his sophomore campaign when the Irish took down UMass Lowell in the regional final to go to the Frozen Four. “[With] everyone on the team and the story of that season, everyone was close with each other, everyone was in it together and that helped push us forward.”

Malmquist, however, has always been a reliable contributor on the ice. During the 2017-2018 season, he was one of many offensive stars as the Irish successfully navigated a challenging Big Ten slate to win both the regular-season and tournament championships. His ninth goal of the year was the game-winning tally that sealed a Notre Dame win in the East Region final and sent the Irish off to the Frozen Four for a second consecutive season.

Malmquist was no stranger to the game when he started at Notre Dame, as he played all four years at Edina High School in Edina, Minnesota. Originally from San Francisco, he was inspired to start playing hockey after his father — who grew up in Edina and played hockey through college — moved the family from the Bay Area back to Edina. During 118 career games for Edina, Malmquist scored 94 goals and added 120 assists for 214 points, cementing him as the school’s all-time career scoring leader. As a senior he tallied 26 goals and 40 assists for a 66-point final season. Malmquist was selected as a 2015 finalist for Minnesota's Mr. Hockey Award and was later named Minnesota's 2015 Associated Press Player of the Year.

Malmquist said that he came to Notre Dame for a number of reasons, among them the stellar athletic opportunities and reputation, but also pointed out the importance “of the amazing community. You can’t go wrong picking Notre Dame.”

As the Fighting Irish press on with their season, Malmquist will no doubt be there as a reliable forward and leader when they host Big Ten rivals Michigan (Feb. 12) and Wisconsin (Feb. 15-16). Looking forward, Malmquist knows it’s important that the team “secures points in the Big Ten. So I think we’re taking that one game at a time.”