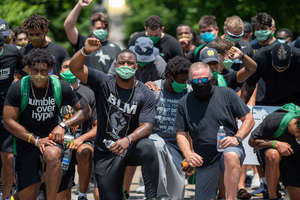 A graduate defensive end, Daelin Hayes has played a significant role on the stout Notre Dame defense throughout his collegiate career. Hayes was a top-300 recruit coming out of high school from Bellville, Mich., and in his freshman year, he played in all 12 games. In his sophomore season, Hayes took the next step on a vastly improved defense and finished the season with three sacks, which tied for second-best on the team. His junior year was much of the same, but last year, Hayes suffered a season-ending shoulder injury against Virginia. This year Hayes was named one of five captains for the team, and he has also taken on the role of leading a young core of defensive ends after Khalid Kareem and Julian Okwara were drafted this spring. But no matter how much havoc he wreaks on opponents’ offenses, Hayes’s biggest contribution this year may be his work off the field.

After he was injured against Virginia, Hayes began volunteering in the South Bend area. He eventually found his way to Lincoln Elementary School, where he served as a conflict resolution volunteer. Both Hayes and his fiancée visit the school twice a week to work with the students.

Hayes also organized the Juneteenth rally and unity walk that took place on Notre Dame’s campus this summer once student-athletes had returned. The event took place outside of the Debartolo Performing Arts Center, and it drew around 1,500 people to campus, including coaches from every varsity sport. At the rally, Hayes gave a 10-minute speech where he emphasized the importance of a commitment to community, diversifying one’s perspective and community accountability to help make change. He also highlighted the importance of giving back to the South Bend community, something that Notre Dame still has room to improve upon. At the rally, Head Coach Brian Kelly noted that the Juneteenth Rally wasn’t a passing moment, but instead a catalyst to open the community’s eyes and ears to the problem of racism, as there is still much more work that needs to be done.

With the organization of the Juneteenth rally, Hayes chose to take action and make a difference. He has been and will continue to be a vocal leader on and off the field for the Irish.