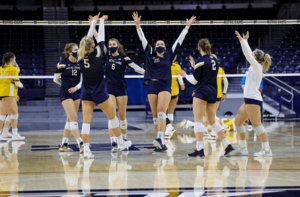 Early morning practice, COVID-19 testing and homework all occur before classes even begin. After classes, it’s on to eating food, heading to the locker room for rehabilitation and finally, engaging in film time by herself and with the rest of the volleyball team. She finishes off the day with dinner — typically with friends — before heading to bed for the night. This is just a regular Tuesday for Caroline Meuth.

Meuth is a sophomore outside hitter on the Notre Dame volleyball team. As a freshman, she finished second on the team kills with 366, while starting in all 29 matches. She even surpassed the 20-kill mark in six separate matches in her first season.

This year has been no less impressive for Meuth. She is currently ranked second on the team in kills with a total of 164. Meuth also has scored the most points for the Irish this season, totalling 199.

Her love for volleyball started with an affinity for all sports. Meuth played many different sports when she was young, but seeing some of her family members play volleyball may have swayed her to stick with the sport. She also loved the fact that volleyball was a power sport and that she could show her strength through every aspect of practicing and playing.

When asked what drives her through tough practices and times, she answered that it was all due to her love of the game. “I can practice and watch volleyball for hours,” Meuth said. After years of playing, she finds it to be one of her biggest passions and pastimes. In fact, you may even catch her at a volleyball game in her hometown if the competition is good enough — she just wants to be around the sport as much as possible.

She continues playing because of the way that the sport allows her to showcase her talents. Her athletic ability is evident in the fact that she started in every single game she has played in her time at Notre Dame, and she earned spots on the ACC All-Freshman Team (2019) and the Second Team All-ACC (2019).

But volleyball is more than just a pastime for Meuth. Meuth is also proud of the way that volleyball lets her display her personality and leadership abilities. She wants to be remembered for more than just the records she sets for herself and her team. “Stats don’t mean much,” Meuth said, adding that she hoped to be remembered for “being a great teammate” because “that’s what means the most.”

As she reflected on the last few years and thought about her favorite memory, Meuth settled on a point from just a few weeks ago. While sitting in the locker room with some of her teammates, one of them pointed out that she admired Meuth. Her teammate explained that Meuth is one of the best teammates that anybody could have, which makes it fun to play on the same team as her. Her teammate also stated that Meuth is admired for her confidence and the way she carries herself. She effortlessly leads by example and exemplifies what it means to play with heart, mind and soul.

These are the ways that Meuth wants to be remembered: as a hard-worker who helped her teammates out and was a source of support for them. Working for her teammates comes easily, especially because Meuth says they are “the best teammates in the world” and they have become another family for her in South Bend.

More impressively, Meuth does not just want to help her teammates, but she also has goals to help the world around her. She said her dream job would be to help formerly incarcerated citizens and their families with rehabilitation.

That upbeat and positive energy can be seen by any fans that attend Notre Dame volleyball games. Meuth can be easily spotted dancing on the court and on the sidelines while cheering on her teammates.

“I will never claim that I’m good at it,” Meuth said, regarding her dancing ability. “But you don’t have to be a good dancer as long as you’re feeling it and you’re confident.”

Meuth does not have to try hard to share her positive energy with others, and her teammates and coaches are appreciative of it. Coaches have told her that she reminds people to play with joy and that she has a swagger when she is playing that is infectious and keeps everybody in a cheerful mood.

Meuth may only be a sophomore, but she is already leaving her mark on Notre Dame’s volleyball team and on campus. In the end, fans will remember her stats, but they should also know the type of person that Meuth works hard to be for herself and everybody around her. Her joy and love of volleyball keep her going as she pushes herself and her teammates to new heights. Meuth continues to strive to reach her full potential on the court, in the classroom and as she walks through life.