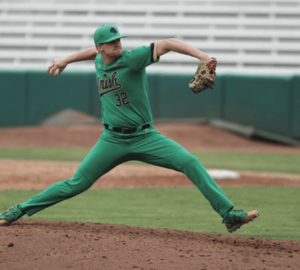 When Cameron Junker was nine, his coach cut him from the baseball team. Five years later, he was asked to rejoin the team. And, five years after that, he was recruited to pitch for Notre Dame.

Now, over 15 years since he first picked up a baseball, the junior pitcher starts for the Irish every Sunday.

After not appearing in a single game in his freshman season, Junker has since developed into one of the team’s top pitchers, and he owes much of his success to former Notre Dame pitcher Scott Tully. In his graduate season last spring, Tully led the Irish in wins (five), strikeouts (53), and he ranked second in ERA (4.20). “Scott Tully was really pivotal in my growth,” Junker said. “He took me under his wing last year specifically and helped me learn and develop the right mental game to be in the right place when I took the mound. We would talk after my outings about what he saw and really get into conversations about what I could do better that would make me more successful.”

Despite a challenging start to the 2019 season with two losses against Arizona State and Eastern Michigan, Junker bounced back with three consecutive wins against Charleston Southern, Wake Forest and Clemson. His performances against Clemson and Florida State in mid-March included season highs for innings pitched and strikeouts.

“It felt like I was in complete control and it was really fun to be a part of that win,” Junker says of the Clemson game, admitting that he felt nervous for the first time this season.

With 7.1 innings pitched, eight strikeouts and only four hits allowed, Junker believes his Clemson performance was the best of his baseball career.

“It’s nice to feel good about yourself for a couple of days, but at the same time you’ve got to really get ready for this weekend,” he said. “There’s really no easy weekend in the ACC.”

“The game was a tough one to swallow, but we are competing at such a high level and showing toughness every single day at the field,” Junker says. “Even though I didn’t feel in control the entire time, I was able to persevere and just keep our team in the game by not allowing runs.”

As the starter for Sunday games, he has the responsibility of pitching the final game for each series.

“It’s kind of fun,” he said. “It really gives me the power to shape the weekend.”

Junker continues to focus on improving consistency regarding his location and change-up. Since last season, he has cut his ERA in half, down to 3.38 from 8.74. His individual improvement comes from both in-season and off-season training, but he attributes the team’s success to their toughness, trust and hard work.

“As a team, everybody’s always there for each other. It’s like a brotherhood,” he said. He emphasized the role of social, academic and on-field support in maintaining this bond.

Being part of a brotherhood, Junker understands his role as an example to underclassmen.

Looking into the rest of the season, Junker has his aim set on a clear strike zone: beat Louisville and make the ACC and NCAA tournaments. The team’s losses at the start of the season have made this goal challenging, but Junker believes that if the Irish continue to play as they have been, they have a good shot.