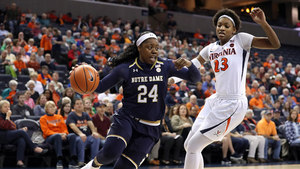 Junior guard Arike Ogunbowale has been a key part of the No. 5 Notre Dame women’s basketball team this season. Leading the team in points per game (20.3) while ranking second in minutes per game (33.4) and steals (47), Ogunbowale has added to her impressive resume, making the Irish a dangerous opponent come tournament time.

“When you need a bucket, Arike is someone who can get one for you,” Karen and Kevin Keyes Women’s Basketball Head Coach Muffet McGraw said in a press conference following the team’s win over Virginia.

Ogunbowale has played well all season but especially as of late. On Feb. 11 against Georgia Tech, she tallied 27 points, leading the team. She then scored a game-high 27 points at Virginia on Feb. 15, also notching eight rebounds. Just one week later, she put up another 26 at home against Virginia Tech.

The Irish won all three of those games by double digits.

Earlier in the season against Tennessee, Ogunbowale played a whopping 39 minutes and scored 27 points as Notre Dame completed the largest comeback in program history, rallying from a 23-point deficit to win by a final score of 84-70.

As of Feb. 26, she is tied for the ACC lead in points per game, making her a strong candidate for ACC player of the year.

Ogunbowale’s success has not been limited to this season, though.

In her sophomore campaign, the Milwaukee native averaged 15.9 points per game and finished 5th in the ACC in total points with 588. She started in all but one game and made the NCAA All-Regional Team. She was also named to the Naismith Trophy Top 30 watch list.

During her freshman season, Ogunbowale played in 35 games and scored 11.4 points per game. She and Marina Mabrey were the first bench duo in program history to average double-digit scoring in the same season.

As tournament season approaches, Notre Dame will rely heavily on its junior leader as the Irish strive to avenge last season’s Elite Eight heartbreak and punch a ticket to the Final Four in hopes of a national championship.