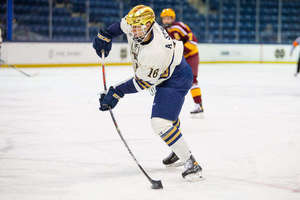 As the Notre Dame hockey season starts winding down, it is time to highlight one of the team’s best players: Alex Steeves. The Irish currently boast a record of 10-12-2, which has them tied for third place in the Big Ten standings, and Steeves is a major reason for that.

Steeves has played in all 24 games and has 26 points, which leads all Irish skaters. Steeves also leads the team in goals with 13, including two against Wisconsin on Feb. 20, which was a come-from-behind shootout win for the Irish.

Steeves, a junior from Bedford, New Hampshire, joined the Irish program after two years in the United States Hockey League with the Dubuque Fighting Saints. In Steeves’ final season with the Fighting Saints, he put up 57 points in 55 games before enrolling at Notre Dame. As a freshman, Steeves found the back of the net twice and added seven assists. Then as a sophomore, Steeves had a breakout season leading the Irish in both points and assists with 28 and 17.

Not only is Steeves a star for the Irish on the ice, he is also an outstanding student. In both his freshman and sophomore seasons, he was named to the Big Ten All-Academic Team, and has made Notre Dame’s Dean’s List every semester he’s been at the university.

Steeves was a rising star during his sophomore season, but he has taken another huge leap this season as a junior. In the second game of the season, Steeves recorded an assist on each of the Irish’s three goals in a loss at Wisconsin, and since then he has not looked back. With 26 points in 24 games, Steeves is just one of two Irish players who are averaging over 1 point per game; the other is fellow junior Graham Slaggert.

Steeves’ tremendous season resulted in his nomination for the preliminary fan vote for the Hobey Baker Memorial Award, an annual award given to the top men’s hockey player in the country. The first round of voting includes over 50 players, and Steeves is currently at number 13 in the vote, with voting closing on Mar. 8. Steeves needs to finish in the top 10 of first-round voting to still have a chance to win the award.

Steeves still has one year of eligibility left after this season, which is terrible news for Notre Dame’s opponents. If he continues on the path he has been on, Steeves could be looking to finish as one of the all-time greats to throw on the Irish sweater.