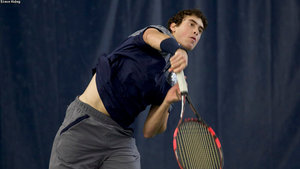 Notre Dame junior Alex Lebedev had a standout fall season for the Irish tennis team. He entered the year at #104 in singles according to the Oracle/ITA preseason rankings. Over the past month, he scored impressive showings at both the ITA Midwest Regional Championships and the ITA National Fall Championships. Lebedev finished his fall schedule with a record of 8-4 and was 3-2 against ranked opponents.

At the 2017 ITA Midwest regionals in late October, Lebedev advanced to the quarterfinals. In the first two rounds, the native of Island Park, New York defeated Harrison Brown of Michigan and Riley Reist of Ohio State in straight sets. In the round of 16, he lost his first set to Zeke Clark of Illinois by a score of 4-6. However, Lebedev fought his way back, winning the next two sets 6-3 and 6-1. The Notre Dame junior then fell in the quarterfinals to Michigan’s Runhao Hua in a three-set thriller, 6-4, 3-6, 6-3.

Lebedev stayed busy during regionals. He made it to the final eight of the doubles tournament with his partner William Howells, a Notre Dame freshman. The two defeated pairs from NIU, Western Michigan and Michigan before falling to Matt Mendez and Hunter Tubert of Ohio State 8-4.

After his outstanding performance in the regional tournaments as well as his national ranking, Lebedev qualified for the ITA National Fall Championships, which took place in sunny California from Nov. 1-5. In his first-round matchup, Lebedev won in straight sets versus nationally ranked Johannes Ingildsen of Florida. He kept rolling in the round of 32, beating Tyler Junior College’s Marcus Walters 6-4, 6-4. Lebedev then faced defeat in straight sets to the one seed in the tournament and the #2 ranked college singles player, Nuno Borges of Mississippi State.

After missing much of his freshman season due to an injury and putting together an impressive sophomore season, Lebedev seems to be hitting his stride in 2017. He and the Irish will return to the courts when their spring schedule begins in January.