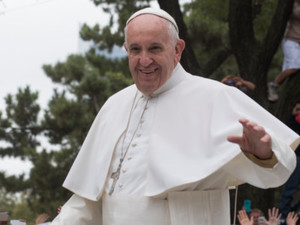 Hundreds of thousands filled Benjamin Franklin Parkway to hear Pope Francis give the 2015 World Meetings of Families closing homily on September 27th. Five hundred of those eager attendees were students and staff from Notre Dame, Saint Mary’s and Holy Cross, who made the pilgrimage to heighten their spiritual understanding and devotion.

Pope Francis’ homily embodied how God loves all people, and that families should be prioritized and cherished because “our families, our homes, are true domestic churches.” “The world is tired of creating new division and new disasters,” Pope Francis said. He spoke of a society where “all of us would be open at the miracles of love for the good of all families.”

Pope Francis also described how this ideal is achieved. “We renew our faith in the word of the Lord, which invites faithful families to this openness,” he said.

“It’s making time to reflect and to pray, and to situate all it is that we do outside of that as a result of our deeper relationship with God,” Father McCormick, Head of Campus Ministry at Notre Dame, says.

As members of a community that often refers to itself as ‘the Notre Dame family,’ we must ask ourselves a question Pope Francis raised in his homily: How are we trying to live this way in our homes, in our societies? Are Notre Dame students taking the proper time to grow and renew their faith as Pope Francis explained?

Father McCormick believes that “the ND community has everything it needs to be able to do this,” and to be the deeply faithful family it continually strives to be and – in many ways – is.

“There are a number of residence hall masses and a number of opportunities for wider prayer,” McCormick says. “There are so many spots where we can not only individually, but communally begin to deepen our relationship with God. But I think that the struggle will come when we have to prioritize that over some other things that sometimes, perhaps, feel a bit more pressing.”

At a demanding, opportunity rich university such as Notre Dame, there are plenty of distractions that students often prioritize over faith.

“Grades seem to be the dominant force of what we value most in the student body. Internships seem not to be too far after,” McCormick says.

This observation is hard to debate - Notre Dame students are highly driven and intellectually engaged by nature; the university attracts and develops an ambitious student body.

Ranked as the thirteenth best university in America by Forbes, Notre Dame is home to the No. 1 ranked Mendoza College of Business, a pre-med population averaging a 29.7 MCAT score (4 points above the national average), and the school just welcomed their most impressive class to date.

Athletics also consume a notable portion of students’ lives. Almost half of the 2015 freshman class alone was a captain on a high school varsity team, and anyone who goes to Notre Dame knows that intermural sports are no joking matter. With 26 successful division one programs, 13 Olympians, and a history of football tradition second to none, Notre Dame’s varsity presence is dominant as well.

All of these inspiring features come together to create a celebrated institution. But is the balance of academics, athletics, and faith – Notre Dame’s three pinnacled values – skewed too close to Hesburgh Library and too far from God Quad?

“Faith can always be pushed back,” McCormick says. “That’s the thought at least. I don’t think its ill-will here - it’s a sense of ‘okay, I have a test tomorrow, or I have a meet in two days,’ whereas faith is always seen as ‘well, I can do that when I graduate or whatever.’ But habits are formed and I think prioritization requires habit.”

Father McCormick gave the example of Pope Francis, who sets aside an hour each day for Eucharistic adoration.

“Show me anyone else with more people reporting underneath him,” Father McCormick says. “He has 1.5 billion Catholics. But he’s finding the time because that’s the priority and that’s important.”

Prioritizing faith and fulfilling other responsibilities are often seen as two mutually exclusive behaviors. However, Father McCormick pointed out that being mindful of the greater purpose and seeking God’s will in daily work – whether it is a chemistry assignment or a flag football game – is conducive to spiritual growth.

“If you aren’t spending a portion of your time studying and cultivating your minds, then you are missing out on what you are being called to do,” McCormick says. “But my question is, what is the reason for the study? If it’s to go through academic Olympics and prove that you can get A’s because that’s somehow linked to someone’s sense of worth in life, I don’t know that that’s worth it. But if it’s ‘hey, I’ve encountered in my faith that I have a deep desire to ultimately make a wider impact on some level, then I am studying and cultivating my mind and using this gift so that I might go out and use these gifts and talents selflessly for others - if I get a b in a course, who cares.’ What matters more is that I’m a well-formed person and balanced.”

“That’s a really hard position,” McCormick says. “I recognize that it’s not simple, but I think it’s part of the challenge we’ll face if we really want to tap into some of these deeper values that Pope Francis is talking about.”

When asked whether or not Notre Dame’s time commitments have hindered his commitment to God, junior bio major Grant Koch says, “My organized religion has suffered. I’m often too stressed to find time to go to church, confession, and events I know I should.”

However, Koch finds divine purpose in his daily efforts, just as Father McCormick emphasized. As a member of the Fighting Irish Track team, Koch says, “all the pain I go through on a daily basis running naturally leads me to pray for strength from God and have a close connection there. I think my relationship with God is as strong as ever.”

Beyond individually prioritizing faith lives and doing God’s will through daily work, McCormick acknowledged the need for communal improvement at Notre Dame as well.

When asked how Notre Dame can holistically achieve deeper spiritual relationships - as Pope Francis encouraged - Father McCormick has a suggestion to students. “Perhaps talking less about how we’re doing in the college football playoffs or how we’re doing in kind of generic topic x, and actually asking ‘hey, how’s your faith life going? Have you been praying?’ When do we have those conversations?”

These conversations and moments of spiritual discovery most often come when we put aside time for them, as Father McCormick encouraged. The World Meetings of Families mass, sandwiched by two 10-hour bus ride to and from Philadelphia, was a priority made by all students in attendance.

“The pilgrimage was an amazing opportunity to form deeper or new bonds with members of my own Notre Dame family,” says sophomore Cecilia Pesavento.

The symbol of the pilgrimage and the messages from Pope Francis’ homily are ideals to strive for. How can we, as the Notre Dame family, find ways to truly grow in our faith lives through everyday actions?

“We have to continue to challenge ourselves to think about how is that we, having seen Pope Francis’ example, are going to seek to integrate that into our own lives as well. That’s the invitation that God makes to us every day,” McCormick says.