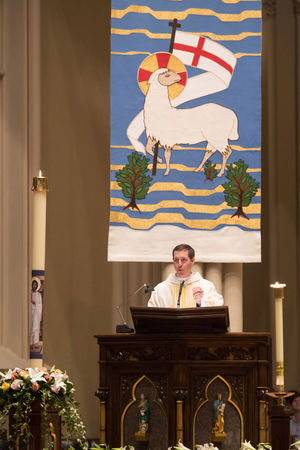 You may recognize him as one of the many Holy Cross priests who calls Notre Dame home. You may have heard him give the homily at the Easter Vigil just a couple of weeks ago. If you live in Dillon Hall, you definitely know him.

Rev. Stephen “Chase” Pepper, C.S.C., the priest-in-residence of Dillon Hall, was recently chosen for the Gates Cambridge Scholarship at the University of Cambridge in England. The Gates Cambridge Scholarship website states that the scholarship rewards “intellectually outstanding postgraduate students with a capacity for leadership and a commitment to improving the lives of others.” At Cambridge, Pepper plans to study Dante, an author he has been heavily invested in for years.

Pepper did not always know he wanted to pursue a graduate degree at Cambridge, however. A native of Huntsville, Alabama, he grew up wanting to study government or law.

Although accepted to Notre Dame as an undergraduate, Pepper found a better fit for him and his family at Seton Hall University in New Jersey. “Everything I was looking for in a college, it just landed [at Seton Hall]. It fit like a glove. I loved my time there,” Pepper said. He graduated in 2007 with a degree in political science and Catholic studies. In 2009, Pepper joined the Congregation of Holy Cross; in 2014, he received his Master of Divinity from Notre Dame.

While studying at Notre Dame, Pepper received a friendly suggestion to look deeply at Dante, and he has yet to stop. “Dr. Gary Anderson of the theology department kind of set me on to Dante in my first year of study here,” Pepper said. “He recommended for a research project…that I use Dante as a part of it, and I had never studied Dante before. But I said, ‘Sure. Why not?’”

Pepper’s passion for and grasp of Dante shone through during his doctoral application process, as he was one of only 35 to be selected for the Gates Cambridge Scholarship.

Despite the change of scenery, Pepper is confident about his upcoming transition to a new school in a new country. He elaborated, “I think that a gift that God has given me is that I fall in love with every place that I live…I try to invest in new places, new people, new experiences, and as a result I love the places that I go. So that’s what I’m looking forward to about Cambridge.”

After Cambridge, Pepper hopes to return to a position like his current one in Dillon. He believes that the impact of the Gospel in such a setting is “unparalleled.”

“The dream is to be an in-residence priest. I wouldn’t want to do it any other way. If you’re a professor here who lives in-residence, you’re fully immersed in the life of the university and the student body.”

In addition, Pepper hopes to continue prison ministry, a practice that he engaged in during his time at King’s College in Wilkes-Barre, Pennsylvania. While there, he said Mass at a local prison once a month and even led a weekly Dante study group.

While Pepper will miss his favorite spot on campus — the statue of St. Edward outside of the hall named in his honor — as well as Dillon Hall and Notre Dame, he stands ready for the next step of his academic journey. And who knows, maybe he’ll be back in the dorms in a few years, just as he hopes.