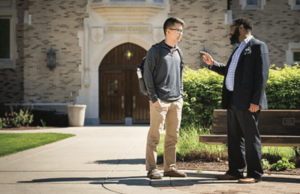 Almost 60 years after its founding, however, the First Year of Studies is dissolving. The university is reimagining the student academic experience and, to the surprise of many, will phase out FYS over the next few years.

“There was no intent to destroy a college,” Core Curriculum Review Committee co-chair Michael McGreevy explained.

In 2014, the Core Curriculum Review Committee began assessing the strengths and weaknesses of Notre Dame’s core curriculum, the set of required courses for all undergraduate students. The committee identified two major problems with the first-year core curriculum: the courses were not challenging enough and the requirements were too rigid.

Responding to students’ frustrations, the university revised its core requirements, allowing students more flexibility in their first year. Previously, students had to fulfill a variety of requirements during their first year, but now they can meet many of those requirements over the course of four years. The Moreau First Year Experience class, however, will remain a first-year requirement. The Class of 2022 is the first class affected by these changes.

“We in the colleges don’t have the expertise in the onboarding process of bringing students through that transition from high school to college,” Review Committee co-chair Michael Hildreth said. “The first-year advisors have that expertise. We can’t afford to lose that.”

First-year advisors will no longer reside in the current offices in the Coleman-Morse Center. Rather, the university will likely keep a “core group of university-level advisors” in a central office while embedding the other first-year advisors within the various schools and colleges, according to Maura Ryan, Vice President and Associate Provost for Faculty Affairs.

Incoming first years will soon enter directly into their college of choice, though they still will not declare a major until the beginning of their sophomore year. In this sense, the new first year experience will remain similar.

“There are already constraints on the first-year classes depending on your [academic] leanings, and so that won’t be any different,” Hildreth said. “It’s just that your advisor might sit in Fitzpatrick [Hall] or Jordan [Hall] instead of Coleman-Morse.” University administration says that this restructuring will streamline the academic advising process.

While first-year advisors will still guide students through their first-year experience, they will soon work more closely with academic advisors within the schools and colleges. The advisors will bring together their different areas of expertise, counseling first-year students who want advice specific to their majors.

First-year student Emma Kerr believes she could have benefitted from a more consolidated advisory system. Kerr plans on studying chemical engineering but is considering applying to medical school. As Kerr sought guidance regarding her academic path, she had to meet with three separate advisors in different buildings.

“It would’ve been nice if I could’ve just gone to the right person the first time and gotten the information I needed,” Kerr said. McGreevy wants “not just the savvy students, whose brothers and sisters went here and have it all figured out” getting good advice. He says that first-generation college students and students with fewer connections will benefit from the increased collaboration between advisors.

The First Year of Studies is now a vestige of an older academic model, a model that no longer fits the university’s vision. “Every core curriculum committee confronts an altered educational landscape, and this committee is no different,” the Core Curriculum Review Committee wrote in its 2016 final report.

As Notre Dame restructures academic life for this changed landscape, it will leave behind a program that has defined the first-year experience for half a century.