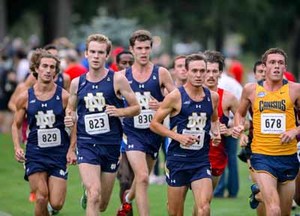 As a new school year gets underway, some of Notre Dame’s most exciting sports programs are kicking off another season. With many strong performances already, the Irish are hoping to carry that momentum forward in the coming weeks. Here’s a quick glance at some key things to know about each team and how each has performed so far.

The cross-country team is scheduled to compete in five regular-season meets this fall, two of which will be here at the Burke Golf Course. The women’s team will be looking to fill the void left by two-time NCAA champion Molly Seidel, while the men will look to improve on last year’s fourth place finish at the NCAA Great Lakes Regional. The team will lace up on Sept. 16 for the National Catholic Invitational, with the Notre Dame/Joe Piane Invitational two weeks later.

To conclude the 2015-16 season, the women’s golf team finished tied for 13th in an NCAA Regional contest at the famed Shoal Creek Golf and Country Club near Birmingham, AL. The team hopes to improve on those results, but they’ll have to do it without last year’s top golfer, Talia Campbell. The fall season will be very competitive, with trips to Oklahoma, Texas, North Carolina, Florida and Arizona on the schedule. Look out for sophomore Emma Albrecht and freshman Mia Ayer on Sept. 24 at the Schooner Fall Classic in Norman, OK. All of last year’s starters will be returning to the men’s golf team, which is very encouraging for head coach Jim Kubinski. The team is competing in six tournaments this fall, with two already in the books. The Irish took home a first-place finish in the annual Notre Dame Kickoff Challenge here at Warren Golf Course with freshman John Felitto taking first and freshman Hunter Ostrom finishing third. The team, led by seniors Blake Barens and Matthew Rushton, is looking to cause trouble in the ACC championships this year, building on last year’s 10th place finish.

The men’s soccer team got off to a strong start this season by winning the Mike Berticelli Memorial Tournament, defeating UC Irvine and New Mexico on their way to the trophy. The Irish have been flawless in their first four matches. They won all four contests and outscored opponents 12-1 in that span, which has catapulted them to No. 1 spot in the rankings (as of Sept. 6). However, the Irish have a grueling schedule ahead of them. Having already defeated reigning national champion Stanford, the team will face off against ACC champion Syracuse along with five other 2015 NCAA tournament qualifiers. The goal this year is the same as it’s been for the last two years: bring home another national championship. Look for the Irish to continue their hot start when they travel to Louisville on Sept. 16. Sophomore Natalie Jacobs and junior Sarah Flores will not be playing on the women’s soccer team this year, instead playing for team USA this winter at the U-20 women’s FIFA world cup in Papua New Guinea. Head coach Theresa Romagnolo is hoping for the rest of the team to step up to the plate in light of those absences, and it’s safe to say that they’ve done so thus far. Currently ranked 20th in the country, the Irish started the season with a pair of wins against Wright State and Wisconsin before losing 2-0 to the Michigan Wolverines. Sitting at 5-1-0, the Irish will be in the midst of a tough four-game road trip when they take on the Syracuse Orange on Sept. 18.

With their best season opening since 2011, the volleyball team is off to a roaring start, sweeping their first three matches of the season. More recently, the Irish missed capturing the Shamrock Invitational title here at Purcell Pavilion, losing to Purdue in four sets. On a brighter note, sophomore Ryann DeJarld and senior Katie Higgins were named to the all-tournament team. The team is in its second year under head coach Jim McLaughlin, the only individual ever to win both men’s and women’s NCAA national titles in volleyball. They turn their attention now to the Spartan Classic tournament on Sept. 16 and 17 hosted by Michigan State in East Lansing, where they’ll face off against the Spartans, Maryland Eastern Shore and DePaul.