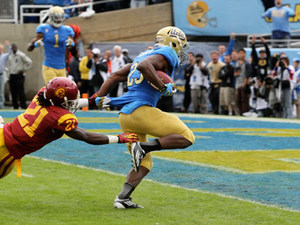 Johnathan Franklin was on top of the world.

A Heisman Trophy contender during his senior season as a running back for the UCLA Bruins, Franklin was drafted by the Green Bay Packers in the fourth round of the 2013 NFL Draft. Early in his rookie year, he had already begun to leave his mark in the NFL with a 100-yard performance against Cincinnati.

In a Week 12 game that season against the Minnesota Vikings, Franklin received the opening kickoff, scampered to the 21-yard line and took a forceful blow on the crown of his helmet.

“That was the last play I ever played in football,” Franklin says.

Two years later, Franklin is the community relations coordinator at Notre Dame, a position within the Student Welfare and Development division of the Athletic Department. He organizes community service events, serves as a liaison between players and coaches and mentors all 750 student-athletes among the 26 varsity teams at Notre Dame.

“My favorite part is helping the student-athletes,” he says. “To help them understand what life is [about]. It’s not just about being great on the field or on the court or in the classroom. It’s about understanding who you are as a person and impacting other people through the platform that you have.”

Today, Franklin is the picture of positivity. He leans forward in his chair and answers questions with passion and vigor, relaying words of strength and hope. But this is a far cry from the torment he went through after receiving that career-ending neck injury.
Franklin grew up in a dangerous neighborhood in South Central Los Angeles, surrounded by gangs, drug dealing and violence. Football gave him a chance to attend college, where he graduated with an honors degree in political science from UCLA.

When the neck injury (which should not have any long-term effects) brought his prodigious career to such a screeching halt, he was lost.

“It was all I knew — playing the game of football — my whole life,” Franklin says. “Life was completely different as far as my identity. Who am I? How do I set my goals? Where do I get my confidence?”

There were days when he cried, nights when he couldn’t sleep. So how did Johnathan Franklin go from a demoralized, sidelined halfback to an impassioned leader of young people?

After just a few minutes of conversation, the answer is obvious: faith. Faith in God’s plan and faith in himself to carry out that plan. Hardly a sentence comes out of Franklin’s mouth without some mention of his fervent belief that God is leading him to where he needs to be.

“Things happen for a reason, and I went through that for a reason,” Franklin says. “I know my purpose is bigger than just football. I know I’m more than just an athlete.”

It’s easy to see why Franklin perceives the hand of God in the process that led him to Notre Dame.  He interned with the Packers during the season following his injury, and in October of 2014 he was advised to create a LinkedIn account. Later that month, he was invited to Notre Dame out of the blue by Mike Harrity, Notre Dame’s senior associate athletic director.

“I came out on a Friday, and by Sunday they offered me the job that I have now,” he says. “It was a blessing.”

Franklin used his injury to recreate himself in a way that he hopes can be an inspiration to the student-athletes he mentors at Notre Dame. Though he doesn’t particularly care whether or not others share his faith, he tries to impress upon the student-athletes that happiness is a choice — a choice that you can make regardless of athletic accomplishments, academic success, wealth or fame.

“There’re no perfect stories in life,” Franklin says. “Everyone is searching for this perfect story where if things don’t get exactly how you plan it, you’re done.

“But there’s no story out there that’s been perfect. It’s been a grind. There’ve been a lot of failures, a lot of mistakes and injuries. You need to understand that you’re writing your story through everything that you go through. So just let your story be written, and you’ll get to where you’re called to be.”

Franklin has aspirations in the political realm, including a lifelong dream to be the mayor of Los Angeles.

“I just want to be humble and a servant to all people — regardless of how much success I’ve received,” he says.

But right now, Franklin is focused on the present. He’s formed a Bible study group and an informal “walking club” where he and student-athletes stroll around campus and talk about life, school and everything under the sun. He delights in bending down to tie an impoverished man’s shoe at a South Bend homeless shelter.  And through all these simple endeavors, Johnathan Franklin finds the joy and meaning in his life that so eluded him when football was taken away.

“I’m just following my calling, and that’s being the best me each and every day,” he says. “Today is my dream.”