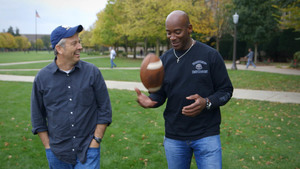 Nineteen letters. Three lines of text. One of the most talked-about college football games in history. All because of a t-shirt.

When Pat Walsh ’89 was a senior at Notre Dame living in Dillon Hall, he came up with the idea to make t-shirts for the Notre Dame community that reflected the designs of then-popular products and featured unbranded university logos and phrases, usually with a clever slogan or two thrown in for good measure. When the Irish played host to Miami in October of 1988, Walsh knew he had struck gold with his shirt for that weekend, playing to the widely-held antipathy between the two schools. It read: “Catholics vs. Convicts.”

On Dec. 10 at 9 p.m. ET, immediately following the presentation of the Heisman Memorial Trophy, ESPN Films premieres “Catholics vs. Convicts,” its newest documentary in the “30 for 30” series. The film, designed to be told from a Notre Dame perspective — especially after two “30 for 30” documentaries which chronicled the rise of Miami football in the 1980s and again in 2001 — is directed by Patrick Creadon ’89 and produced by, among others, Jerry Barca ’99.

“It was fascinating for me to research and relive the story behind the t-shirt,” says Creadon.

“I was already really close to that, and yet I learned a lot. I also got to talk to a lot of people from both Miami and Notre Dame and get their perspectives [of the story of that game].”

The issue of the shirt, and in turn the name of the documentary, angered many in both the Notre Dame and Miami communities because of its polarizing message. Barca notes that the title was one of the last components of the film to be decided due to all the discussion among the production team about the appropriateness of the phrase as the title.

“The conflict that exists and the cringing surrounding [the shirt] are things that we still wrestle with as a society,” Creadon explains. “We’re constantly trying to figure out how to treat each other, and the shirt is a great example that as soon as you take a shot at someone, feelings are going to get hurt and tempers are going to flare, and we have to relive the shirt all over again.”

Lou Holtz, who coached the Irish from 1986 to 1996 and whose only national championship came with the Irish in 1988, confronted the issue of the shirt’s implications more directly.

“That really wasn’t accurate,” Holtz said on Miami-based The Dan Le Batard Show with Stugotz in 2012, “because a lot of our players weren’t Catholic.”

The film features plenty of commentary not only from members of both the 1988 Hurricanes and Fighting Irish teams, but also from media members with close ties to both programs.

From 1982 to 2009, Nolan worked as Sports Anchor and Producer with WNDU (South Bend’s NBC affiliate), a role which saw him regularly announce Notre Dame football games; however, he was not on the call for the Miami game (the game was nationally broadcast on CBS) and was instead able to enjoy the game from the press box.

“The emotion of that game was unsurpassed,” Nolan adds. “Miami had the swagger, and the t-shirt was a catchy sales technique, and it caught on.”

There were two distinctly daunting challenges that he faced during the production process, Creadon says.

“The most difficult part was probably feeling like I had too much good information to pack into the film,” he says. “As a result of having a lot of personal and first-hand experience with the story and having basically lived with the story, we ended up having a lot of good stuff. Which means that whatever did end up in the movie was very strong. There’s a lot of different stories and we tried to weave them together in a way that’s fun.”

The other was slightly more personal. “I thought to myself, ‘I cannot screw this up. I’ll have to look at my friends and family after this, so if I didn’t do a good job I’ll have to live it down for the rest of my life,” he says.

The one takeaway Creadon wants viewers to have on Dec. 10 when they first see the film is that its significance is more than just a game. Rather, it highlights the true magic of college football and those who make it so intriguing.

“[What I want people to realize is that] college football is the greatest sport in the world,” says Creadon. “It’s a great game, it has wonderful traditions. If you play football, or sports in general, you’re nothing without your enemies. Without them, nobody’s going to the stadium. Nobody cares.”

He adds: “When you go to a school like Notre Dame or Miami, the competitive level that they play at is extremely high, and yet an hour after the game everyone is back in the dorm with their friends. There’s something really special about the dynamic of college football.”