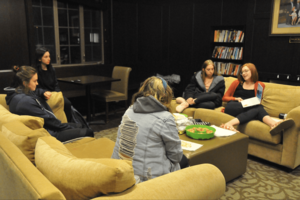 In 1972, Notre Dame admitted women for the first time. In 2020, nearly 50 years later, the university saw the third all-female ticket elected to the roles of student body president and vice president, and the class of 2021 is the first class in which the number of female students exceeds the number of male students. As women continue to establish a greater presence in society, the term feminism has become a prominent, yet easily misunderstood expression of equality.

In their conversation series, Flaherty Feminism, Flaherty Hall is exploring what feminism means in an intersectional society. Intersectionality refers to how categories such as race, class and gender can overlap and interconnect for individuals and groups, which can lead to difficulties for those people in society as they must cope with ranges of biases. The series overlaps with Women’s History Month in March, and includes eight discussions meant to prompt honest conversations built around differing viewpoints and life experiences.

“Feminism just means fighting for the right for every individual to define their own identity,” sophomore Ashton Weber, Flaherty gender relations commissioner, said, citing Audre Lorde’s definition of the term.

“I think this feminism thing actually has a lot more to it than just burning your bra and saying you hate men, that's not what it is at all,” Weber said. “And when I came here, I was like, oh, surely, lots of people will talk about this at Notre Dame! I don't know what I was thinking. They just weren't.”

Weber grew up in a conservative community where feminism was not a prominent point of discussion. Upon becoming Flaherty’s GRC commissioner, Weber sought to create a space for discussions about feminism on campus. Other students have welcomed the discussions.

“There’s so few spaces to talk about the politics of campus and I love this space to address problems so prevalent to everyday life here,” sophomore Lexee Dalgleish said.

Sophomore Audrey Filonczuk voiced a similar opinion: “I think that we need to bring up these issues more on campus and it’s a low-pressure environment to discuss representation issues.”

The topics for the discussion series covered a range of themes, including intersectionality, social constructs, representation, allyship and the gender binary. Several of the talks fostered more personal conversations, with focuses on self-image and the question “what makes you angry?” One of the major focuses throughout the series is intersectionality, which Weber believes is a central part of feminism.

“I don't think it's truly feminism if it's not intersectional, because I think there's such an importance on understanding the value of each person relative to how they choose to live and express themselves and I think that's, at its heart, what the goal of feminism is,” she said.

Each meeting includes a short video or several slides and a few discussion questions. Weber emphasized that everyone is welcome, whether or not they support feminism.

Weber is particularly interested in exploring how feminism intersects with faith. “Through learning more about feminism, I've come to understand that any God that I would want to believe in would have to be loving and accepting of all the people that they created,” she said.

At Notre Dame, this relationship between feminism and faith is complicated. Weber’s graduation year will be the 50-year anniversary of women being able to attend the university, and a woman can never be its president because it’s run by a congregation of priests, she said. Weber said that the male-dominated church environment prompts many questions regarding gender, power and faith, especially at Notre Dame.

“This whole place was made not for us,” Weber said, referencing her female identity. “It's going to be harder for us to find belonging and a place at a place that wasn't made for us.”

An upcoming conversation on feminist topics is scheduled to occur at 8:30 p.m. in the Flaherty Reading Room on April 20