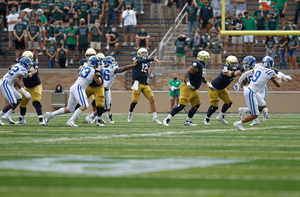 For Notre Dame football, the 2020 season promised to be unlike any other in the team’s 133-year history — and not just because it was set to be played during a pandemic. Ironically, Knute Rockne’s inaugural season as head coach of the Fighting Irish was played out during the 1918 Spanish flu pandemic. When you’ve been on the gridiron since 1887 like Notre Dame has, there aren’t too many more “firsts” to be had, but this COVID-19-altered season marked the first time in Notre Dame football history that the team played within a conference.

There was no season opening matchup with Navy in Dublin, no Wisconsin in Lambeau and no USC or Stanford rivalry games, but there was a chance to play in a conference for the first time.

It all started against Duke under an overcast sky in front of 10,097 fans, mostly students. With Notre Dame Stadium cloaked in Atlantic Coast Conference signage at roughly 13 percent capacity and the marching band socially distanced and out of uniform, the stadium appeared vastly different. The team, on the other hand, returned talent from the season prior that featured a third straight 10-win season and a 33-9 domination of Iowa State in the Camping World Bowl.

A few weeks prior to that bowl win, Notre Dame chose to part ways with offensive coordinator Chip Long. To replace him, the Irish opted to stay in-house and promote 28-year-old quarterbacks coach Tommy Rees, whose first play-calling experience came in the Camping World Bowl, to the role of offensive coordinator.

No. 10 Notre Dame retained graduate student and three-year starter Ian Book back at quarterback and all five of their starting offensive linemen from last year, but they also had a new man calling the plays. All eyes were on Rees and the Irish offense in the opener. Meanwhile, Duke and head coach David Cutcliffe looked to start fresh after a losing season in 2019, and adding Clemson transfer quarterback Chase Brice certainly helped that cause.

Notre Dame began the game with three straight three-and-outs, took an early 3-0 deficit and got outgained by the Blue Devils 151-7 in the first quarter. It took a Jay Bramblett fake punt conversion on fourth-and-8 early in the second quarter to spark the 12-play, 96-yard  touchdown drive that gave the Irish a 7-3 lead they never looked back on. At the end of the first thirty minutes, Notre Dame led 10-6 despite Duke’s advantage in time of possession, total yards and first downs.

In the second half, Notre Dame made the adjustments necessary to solidify and maintain the lead behind their dominant offensive line. Sophomore running back Kyren Williams, in his first start, erupted for 205 all-purpose yards and two touchdowns. Clark Lea’s defensive unit held Duke to just 82 total yards in the entire second half, and Notre Dame pulled out a 27-13 season-opening victory.

Williams was awarded the game ball for his efforts. Junior linebacker Jeremiah Owusu-Koramoah was phenomenal, posting nine tackles, two tackles for loss, a sack and a forced fumble. Unfortunately for Notre Dame, All-American sophomore safety Kyle Hamilton was injured and did not return to the game.

Book finished the game 19-of-31 for 263 yards, a touchdown and an interception. Graduate transfer wide receiver Ben Skowronek, who started alongside seniors Avery Davis and Javon McKinley, left the game in the second quarter with a hamstring injury and did not return. Davis was the only one to record any catches out of this starting unit, posting two for 26 yards, one of which was a strong 17-yard touchdown catch made with a defender draped over him in the end zone.

In the end, the Irish won their seventh consecutive game and their 19th home game in a row, tying the second-longest home win streak in school history. They also added to a 25-game win streak against unranked opponents.

“[Today] was a blessing,” Williams said, “because we all know six months ago, we had no idea if we were ever gonna be back in the stadium this year to play.”