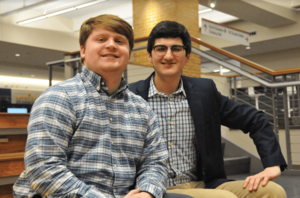 Dugan, a junior majoring in computer science and economics, has a passion for sexual violence prevention and personal experiences as a low-income student. Pozas Garza, a junior civil engineering major, cares deeply about transparency and club funding.

The strongest component of Dugan and Pozas Garza’s platform is its plan to combat sexual violence on campus. Their knowledge and experience on the issue set them apart from the field of candidates.

“The most important issue on campus, I think, is preventing sexual assault,” Dugan said.

During his freshman year, Dugan’s friend and current campaign manager Julie McKeon told him she had been sexually assaulted and asked for his support and guidance. As Dugan helped her navigate the Title IX sexual assault reporting process, he witnessed glaring problems in the system. That experience prompted him to become a student leader on sexual violence prevention, joining the GreeNDot Student Advisory Council and the Gender Relations Center FIRE starters program. Dugan believes his experience sets him apart from other tickets on this issue.

“We have to look to solutions that aren’t just tired old solutions from old student governments,” Dugan said.

To support sexual assault survivors, Dugan proposes the creation of a Sexual Assault Peer Advocates (SAPA) program. The program would train a team of students on how to advise and support survivors of sexual violence. Dugan said this program would fill a void in the Title IX process, providing survivors with confidential, competent, round-the-clock support.

Both Dugan and Pozas Garza are members of the Club Coordination Council (CCC), and they have ambitious plans to increase club funding. They believe increased club funding would foster diversity and inclusion.

“If you don't find your community in your dorm, and you're a student who is non-white, you'll frequently find it in these cultural clubs,” Dugan said. “They do a lot together. They’re very tight-knit communities.”

A large part of this funding would come from cutting the student government budget in half. Additionally, Dugan and Pozas Garza propose making certain club leaders voting members of the Financial Management Board.

But club funding is only one piece of the team’s vision for diversity and inclusion. They’re also focused on providing more opportunities and resources for low-income students. As a low-income student himself, Dugan said he has needed to work several jobs at a time, and he wants to push for more socioeconomic diversity on campus.

Pozas Garza, who is originally from Mexico, is not a U.S. citizen or permanent resident, and he said his immigration status has posed a challenge as he looks for jobs after college. But he said the Notre Dame community has welcomed him, and he wants to ensure other minority students have positive experiences.

“I just think Notre Dame is an incredible place, and the way it received me is the way I want it to receive anyone else.” Pozas Garza said. “I want to make sure other people are also welcomed with open arms.”

Dugan and Pozas Garza bring undeniable passion to this student government election. Their platform is detailed and well-researched. Their clear knowledge of sexual assault issues and club funding are the selling points for their ticket, and their lofty goals across the board could prove to inspire the student body.