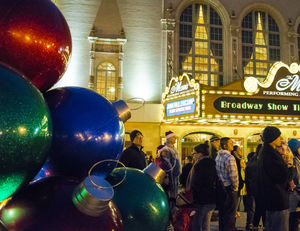 The annual Christmas tree lighting in Downtown South Bend on Dec. 5 was a winter wonderland for the dozens of excited children who attended with their parents.

Children climbed the giant Christmas-bauble statue in the Jon R. Hunt plaza, illuminated by strings of white lights hanging overhead, while live holiday music played. Santa hats were distributed to all in anticipation of the arrival of Santa Claus himself.

“This is the 26th year of downtown for the holidays,” Paula Garris, special events supervisor for the South Bend Parks Department, says. “I think it’s exciting for families to come down and have some downtown events going on and see what they can do in their community and have a good time.”

Marie Delacruz just moved to South Bend with her husband and two preschool-aged sons. This was the family’s first time attending the event.

“So far, we’ve had a blast,” she says. “The kids have been having a great time. Where we came from we didn’t have this kind of thing so it’s really nice, all the decorations up, it’s been great. I love it so far.”

Santa arrived in a red fire truck, welcomed by a chorus of cheers from the kids. The crowd then followed the truck in a parade through downtown South Bend, which had been shut down to traffic and illuminated with wreaths, trees and lights. The procession ended at Santa’s workshop, a gingerbread-like house. While a long line waited to meet him, families were treated with a surprise: a display of fireworks erupting overhead.