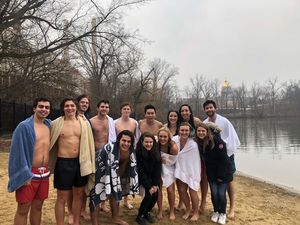 Welsh Family Hall’s second-annual Dance Fest (Jan. 25- 26) consisted of two fun-filled nights of dance performances that showcased the amazing talent of Notre Dame’s very own student dance groups. Each group brought fresh, vibrant performances to Washington Hall that left the full house thoroughly entertained. Some of the favorite acts were Troop ND, Ballet Folklorico Azul y Oro, Swing Club and Project Fresh. In addition to the group performances, Christina Murray’s flawless baton act kept me on the edge of my seat and was one of the many highlights of the night. The emcees, Ally Morcus and Samuel Jackson, kept the momentum going between acts with witty back-and-forth and gifted the audience with a killer Beyoncé impersonation. The night ended with a dozen of Welsh Fam’s own Whirlwinds performing an exciting dance and baton number. All the proceeds from this event went to Unity Gardens in South Bend, an organization that seeks to empower people of all socioeconomic statuses to grow and prepare their own healthy meals. Overall, you could tell Welsh Family Hall put all their heart and soul into making this event spectacular for such a worthy cause.

There is nothing on campus that has such a magnetic pull as the Keenan Revue — what other dorm event on campus compels hundreds of students to wait hours in line in the freezing cold for tickets? The crowd for the 43rd-annual Keenan Revue was packed with students and a shockingly large number of parents and alumni coming to enjoy the hilarious skits, live music and dance (well ... strip) numbers. This year’s skits were stellar, with guest appearances from some of Notre Dame’s biggest “celebrities.” The running gag of Notre Dame’s infatuation with Garth Brooks was timely and relatable to many in the audience; student athletes were accused of constantly receiving a free pass; and a parody of “Chopped” highlighted Hagerty Family Café’s unusual obsession with crepes and the questionable food labels at the dining hall. The Revue also tackled pertinent issues on campus, such as access to contraceptives and the recent decision to remove the Columbus murals from the Main Building, with a scene featuring impersonations of University President Rev. John I. Jenkins, C.S.C. and Vice President of Student Affairs Erin Hoffmann Harding. Musical acts included Father Jenkins singing “school is not for the poor” to the tune of “Love Is an Open Door” from Disney’s “Frozen.” You could tell that the Keenan Knights put all of their effort into making this year’s show incredible to raise money for Dismas House of South Bend. Judging by the roars of laughter from the crowd, I’d say they succeeded in making the night fun and enjoyable for the entire audience.

Despite the 35-degree wind chill and freezing rain, dozens of daring students could be found dove into St. Joseph’s Lake on Saturday, Feb. 23. The Polar Bear Plunge, hosted annually by the women of Badin Hall, is a fundraiser for St. Margaret’s House. After paying a small fee, participants sprinted from the beach into the frigid water and then warmed up with heat lamps and hot chocolate. St. Margaret’s House is located in downtown South Bend and aims to provide individual attention to local women and children by offering them food, toiletries and parenting classes. The donations produced by the Polar Bear Plunge help the organization to better achieve this mission. Badin Hall residents continue to revamp the Plunge every year in hopes of attracting more and more students. This year, they recruited campus celebrities, such as Student Body Vice President Corey Gayheart to participate, gave every participant a free wristband and hot chocolate and sold event T-shirts prior to the plunge. Overall, Badin’s goal is to bring Notre Dame students together in order to improve the community — and to experience a taste of adrenaline.