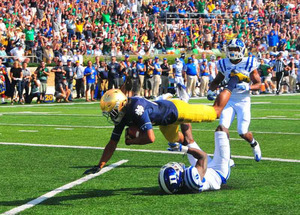 The Irish fell to 1-3 Saturday, losing 38-35 to a Duke squad they were favored to beat by 21-points heading into the contest. It was a shocking loss for Notre Dame, but maybe it shouldn’t have been so surprising, as the game followed a familiar narrative. DeShone Kizer and the Irish managed to put points on the scoreboard, but the defense did little to prevent the opponent from doing the same.

In his post-game press conference, Brian Kelly said a lot. And suffice to say he was not happy.

“Every position, all 22 of them, will be evaluated,” Kelly said. “Each and every position. There is no position that is untouchable on this football team.”

As poorly as the Irish played, they still had a chance to win the game late in the 4th quarter. Duke came into the game as one of 8 Football Bowl Subdivision teams that had yet to make a field goal, but freshman kicker A.J. Reed hit his first of the season with 1:24 remaining. The field goal gave the Blue Devils a 38-35 lead.

Kizer and the offense managed to get to their own 44-yard line but then failed to convert on a 4th and 3. Duke then took a knee to seal the Irish’s fate.

Notre Dame’s defense really struggled, as the Blue Devils had success both running and passing the ball. Duke freshman QB Daniel Jones played like a star, completing 24/32 passes for 290 yards and 3 touchdowns. He was particularly successful getting the ball out of his hands on quick passes, but beat the Irish down the field as well. RB Jela Duncan torched the Irish for 121 yards on 21 carries, and the Blue Devils compiled 498 yards of total offense.

There were a few bright spots on the offensive side of the ball. DeShone Kizer didn’t play his best game but still completed 22/37 passes for 381 yards, 2 touchdowns and an interception. He added 60 yards rushing and a score as well.

Wide receiver Equanimeous St. Brown came to play, catching six ball for 116 yards and a touchdown. Running back Josh Adams picked up 60 yards on 14 carries and scored a touchdown as well.

Heading into the weekend, the Irish were one of two teams in the FBS along with Nevada that had yet to record a sack. Nevada picked up a sack in an earlier game, leaving the Irish alone in this category until L.B. Nyles Morgan managed to end the drought early in the second half.

Backup quarterback Malik Zaire Zaire saw the field a few times. He technically got the start at receiver as he lined up there in the Irish’s first offensive snap and ended up rushing for four yards on the play. Later on, he came in motion, received a pitch from Kizer, looked to pass, and ended up being sacked for a big loss. After the game, Kelly said these packages with Zaire would not be used moving forward.

“Once you feel like you’ve got something going pretty good, we tend to make a mistake and let teams back into the game. We’ll have to re-evaluate what we’re doing, who we’re doing it with and how we’re doing it.”