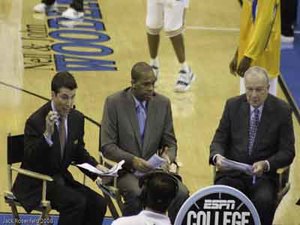 Whenever Notre Dame basketball is relevant deep into March Madness, memories of the distinguished days of Digger start to resurface.

This past season was the first time since the late 1970s that Notre Dame has reached the Elite Eight in consecutive seasons. Fans view the team’s recent success as exciting, but attendance figures show that this excitement hasn’t generated active fan engagement.

According to the NCAA, Notre Dame ranked 59th in total attendance for men’s basketball home games. The Notre Dame Athletic Department even made student tickets free this season in order to encourage students to show up.

Back in the days of Digger Phelps, Irish hoops were one of the biggest shows of the winter season.

“We were a force and we were also rock stars,” Phelps says.

But before Phelps took over the program in 1971 after a 26-3 season at Fordham, things were different. If Notre Dame football was the penthouse suite, Notre Dame basketball was the basement.

The Irish made a gradual climb, from 6-20 in Phelps’s first season, to a National Invitation Tournament championship appearance in 1973, to seven Sweet 16s, two Elite Eights and the program’s lone Final Four appearance during his tenure.

As the team reached new heights, so did its following. As an independent team, Notre Dame scheduled top competition. UCLA, San Francisco, Marquette, DePaul, Kansas and Virginia all challenged the Irish.

The Irish also competed in fans’ homes on TVS, a new sports network with a budding audience.

A total of 4,000 Notre Dame students packed the Joyce Center. There was an “A” and a “B” student package. Phelps helped generate hype in a variety of ways to draw attention to the team. He believes the support and success of the program were directly tied to marketing.

Phelps sold life after Notre Dame to his players. The team became a reflection of his personality. The players signed every autograph. They took every picture. They wore suits and ties to games.

His long-term approach to appeal to young athletes worked. Of his former players, John Paxson is now the vice president of the Chicago Bulls. Brooks Boyer is the chief marketing officer of the Chicago White Sox. Mike Mitchell became the president of sales at Nestle USA.

The Irish were also closely aligned with the Notre Dame community on campus. Phelps spoke in the dorms in the fall to “get [students] all fired up.” The players, including star scorer Kelly Tripucka, who resided in Morrissey Hall for four years, lodged in the dorms with their fellow students. These actions jolted the game atmosphere and made the Joyce Center a raucous environment to play basketball.

“The place was crazy. And the students made it crazy,” Phelps says.

NBC broadcaster Dick Enberg once crowned the Notre Dame student body the most valuable player of the game. The team and the students were known to celebrate together after especially momentous victories.

Phelps says that interest in college basketball has changed as the faces of the game have become different.

“You go back to when I was coaching, there were coaching personalities,” Phelps says. “The coaches were a part of it. Today, there aren’t any personalities.”

Phelps developed a reputation as a controversial figure on the road. Opposing fans would chant, “Digger is a wimp.”

“At [UCLA’s] Pauley Pavilion, [the fans] used to hate me. I wanted them to hate me,” Phelps says. “They’d be shooting a free throw, and always chant, ‘Sit down, Digger.’ I’d stand up and they’d be yelling. I’d come out of the locker room and they’d start booing.”

Phelps thinks there is plenty of blame to go around for basketball once again taking a back seat at Notre Dame. He believes that the priorities of Notre Dame students have changed, and that this new generation of students has failed to keep up with the extensive traditions of athletics at the university.

“We have gotten too much into test scores and GPAs. If you’re a 5.0 and you can’t say hello to anybody because you’re too busy on your phone — hello, that’s not what the world is all about,” Phelps says. “I don’t think the students know the mystiques and traditions of this place.”

Phelps says the program’s drought in the tournament has turned fans away. Last year was the first NCAA tournament since 2003 in which the Irish reached the Sweet 16.

But Phelps is not overly absorbed in the present state of Irish basketball. The countless stories of his coaching career show that he takes pride in his contributions to the program’s legacy. He recalls a passage from a book he read, which states that Phelps did for Notre Dame basketball what Knute Rockne did for Notre Dame football.

“It was all part of the show business. And marketing. And winning against very good teams,” Phelps says.