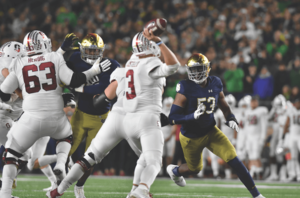 No matter what challenge lay ahead of them, they answered. No matter who they went up against, they weren’t intimated. Every week, they made a difference. By the end of the season, they had cemented themselves as one of the strongest and most consistent units of the 2018 Notre Dame football team.

They were the defensive line.

From freshman brothers Justin and Jayson Ademilola to graduate student Jonathan Bonner, over ten defensive linemen got substantial playing time throughout the season, making the line one of the deepest positions on the team.

“The message from the beginning was that a lot of guys are gonna play,” senior defensive tackle Jerry Tillery said. “I think that influences the work ethic of guys in the offseason and in fall camp when they know they’re gonna get a chance.”

Coached by Mike Elston, the defensive line clearly came out of camp ready to go, and their talents were on full display for the season-opener against Michigan.

Prior to the game, the talk focused on Michigan’s pass rush, but Notre Dame’s stole the show.

Junior defensive end Khalid Kareem, who burst into the spotlight against USC in 2017, notched eight total tackles and added a sack. Fellow junior Julian Okwara had an interception, and Tillery forced the game-clinching fumble.

That proved to be a theme throughout the season, especially in the next big game against Stanford.

Senior running back Bryce Love was also one of the most electrifying players the Irish would face all year. He rushed for 125 yards against Notre Dame in 2017.

When asked about the statistics of Stanford’s offensive line leading up to the game, Kareem said, “I’m aware ... But I feel like this defensive line will definitely change that.”

The Irish secured five sacks en route to a 38-17 win, four by Tillery. The senior earned the game ball for his dominating performance.

Week in and week out, the defensive linemen came up with huge plays that helped Notre Dame win all twelve of their games — Kareem’s forced fumble against Virginia Tech which junior cornerback Julian Love returned for a touchdown; Okwara’s seven quarterback hurries in a hard-fought win against Pittsburgh; sophomore defensive tackle Kurt Hinish’s 1.5 sacks against Syracuse.

“Consistency is key,” Elston said. “I’m the same guy every day, and I ask them to be the same guys every day.”

For months, they were. In the Cotton Bowl, the Notre Dame pass rush sacked Clemson quarterback Trevor Lawrence three times, but the Tigers rushed for over 200 yards on their way to a 30-3 win.

Despite the disappointing end to the 2018 season, no one can deny that the defensive line’s depth and consistency helped the Irish complete their perfect regular season.

As the memories of 2018 turn into an eagerness for 2019, Elston and the line look to remain just as dominant. Tackles Tillery, Bonner and Micah Dew- Treadway will graduate from the program, but most others will return.

With Kareem, Okwara and Daelin Hayes as senior defensive ends, Myron Tagovailoa-Amosa fully back from a foot injury and the Ademilola brothers another year older, the 2019 defensive line looks poised to replicate this year’s success and more.

But Louisville is 222 days away. Between then and now, the team will prepare the same way they did this year.