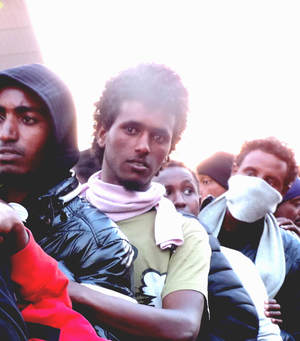 Walking through the Baobab Refugee Camp in Rome one afternoon last April, I first have to navigate a sea of empty tents filling a parking lot. Many are slightly upended, crammed alongside each other with their flaps hanging open. A few are weighted down with rocks. Some shelters consist of nothing more than rigged up tarps, cardboard boxes and garbage bags.

Save for a few women talking quietly, huddled together on plastic lawn chairs, the only movement comes from a breeze lifting a flimsy sheet hanging on the fence proclaiming, “Refugees welcome.”

As I make my way to the center, however, I come upon an oasis bursting with humanity.

I’ve arrived just in time to see Baobab’s patrons gathered in a huge circle, cheering and cat-calling while three young men in the center spin and flip in a break-dance-off. Two see me and exclaim “Andrea!,” breaking away to welcome me with Italy’s double-cheek kiss. Beside us, some of the men have set up a makeshift barbershop on the hood of a volunteer’s car and are taking turns shaving each other. Kids bounce on a tiny trampoline.

After the break-dancing disintegrates into the competitors laughing and hugging, Charlie Puth’s “See You Again” comes on. Amidst the other men and women pairing up to dance with each other, one man spreads his arms out like wings, closes his eyes and tilts his head up to the sky, swaying and awash with calm.

“The first step in travel bans or things of that kind would be to de-humanize whoever it is, because if you recognize the full humanity of someone, you’re going to feel moved to help that person,” Father Diego Alonso-Pasheras, an associate professor at the Pontifical Gregorian University in Rome, says. “And that’s basically what’s being done with refugees — ‘They are terrorists, they are rapists.’”

"Less human" was not a sentiment that struck when walking into Baobab. But the past 10 months have seen a series of policy changes and headlines that are enabled by a unidimensional, depthless concept of refugee personhood. Jan. 27 introduced President Trump’s first travel ban to the world, an executive order banning entry by citizens from Iraq, Syria, Iran, Libya, Somalia, Sudan and Yemen for 90 days, and by Syrian refugees indefinitely. Over the following months, lengthy legal debates resulted in a cycle of blocking, modification, reinstatement and blocking again. On Oct. 24, the Trump administration announced that refugee admission to the U.S. would be allowed to resume — but that those from 11 targeted countries (presumed to be the original seven of the January ban plus Egypt, Mali, North Korea and South Sudan) would only be allowed in on a case-by-case basis after proving that their entry would be in U.S. ‘national interest,’ essentially instating a de facto ban.

“In terms of a ban on specific nationalities … I just think that’s crazy,” Elizabeth Ferris, professor at Georgetown University’s Institute for the Study of International Migration, said during a July conversation, two days after the ban had been partially-upheld by the Supreme Court on June 29. The countries excluded at the time were Iran, Libya, Somalia, Sudan, Syria and Yemen — all Muslim-majority. “If you’re trying to prevent terrorism, then these particular six countries are not the ones to be targeting. Countries like Saudi Arabia or Pakistan or others …. [that] have actually been involved in some kind of terrorist activity.”

More concerning than intense misinformation, however, is the other sentiment fueling the ban: fear. Like the logic the ban pushes, these fears are born of equal miscalculation.

After the Oct. 31 terror attack in Manhattan, there’s been a predictable spike in general anti-immigrant and Islamophobic rhetoric — sometimes surreptitiously. The New York Times sent out two mobile alerts in the days following the attack. The first chose to note that the attacker — who is not a refugee – had “yelled ‘God is great’ in Arabic” as he plowed into pedestrians. The second pointed out that he had recently immigrated the United States from Uzbekistan.

“The whole toxic narrative around refugees and migrants more generally is deeply disturbing,” Ferris says. “Some of the statements coming out of the White House about migrants and refugees and [needing] fortified borders to keep people out and more extreme vetting, I think that’s played into American fears about foreigners.”

Ferris believes policy directed at inhibiting refugee entry into the United States is “misguided” and “founded in a lot of ignorance.”

Alonso-Lasheras shares the same belief. He describes various misinformed fears Americans, Italians and others have amassing into a “rhetoric of fear” that has taken hold in several nations. And as seen with Trump’s various travel bans, this rhetoric can directly influence government policy.

“To break down the rhetoric of fear, the first thing you should do is go to facts,” Alonso-Lasheras says. “Because the rhetoric … is usually built on lies — or half-truths, which are a lot of times a lot worse than pure lies.”

“Behind the [rhetoric of] fear is this fear of terrorism and the facts just don’t hold that up,” Ferris said. “Refugees are screened before they come to the United States, a very intense, arduous vetting process. It takes 18 months to two years ... If you’re going to do harm to the U.S., the last thing you’d do is try to come to the United States as a refugee.”

Another widely held theory is that if refugees are at least not terrorists, then they are thieves, rapists or murderers — that an influx of refugees will turn your town into a community you can’t walk around alone in after dark. According to Pew Research Center, 81% of Americans believe that refugees leaving buzzword countries such as Iraq and Syria pose a “major or minor threat” to the well-being of the U.S.

But according to the New York Times, no refugees in the U.S. have killed any Americans since 1980. Among men 18-49, immigrants are one-half to one-fifth as likely to be incarcerated as someone born in the U.S., and immigrants to the U.S. are actually less likely to commit a crime than a native-born American.

And though many Americans and Europeans may imagine hordes of refugees flooding into their cities, causing economic and social disaster (according to FiveThirtyEight, in July 2016, 53% of Americans thought that the U.S. should be admitting fewer refugees), there is no cause for panic.

The countries receiving the vast bulk of migrants are those immediately surrounding the home countries of most refugees, namely Jordan, Turkey, Pakistan, Lebanon, Iran, Ethiopia, Kenya, Uganda, the Democratic Republic of Congo and Chad, who, according to Al Jazeera, together host 50% of the world’s refugee population, more than 3.5 million persons. In contrast, the U.S. — a country significantly larger than any of those listed — accepted around 85,000 refugees last year, according to PBS.

“The widest inaccurate theory is the one that’s expressed as ‘We can’t take them all,’ as if someone was claiming that we — whether that ‘we’ is the United States, Europe in general, or some country in Europe — is being asked to take them all,” Alonso-Lasheras said. “But actually it’s certainly not the United States or any country in Europe that is taking all of them in.”

Less palpable, however, is the last theory, possibly the most harmful of them all. That born from indifferent or even well-intentioned onlookers — those who think of refugees as harmless, but uneducated and dirty, or as victims of singular backstories. There is a certain fetishization of refugee suffering, one which revels in collecting the most horrifying stories and photos, and in doing so - even in well-meaning appreciation of the hardship refugees endure - subconsciously denies them the entirety of their humanity. These one-dimensional characterizations create a dehumanizing divide between the uncomplex Them and Us, one which eventually allows for those larger misperceptions of fear and terrorism to take hold by establishing a simple and fatal concept: that refugees are not just like us.

“I think whenever you see foreigners or immigrants or refugees and don’t get to know them as people, you put yourself above them for not understanding them,” Ferris said. “Interact as just regular human beings.” 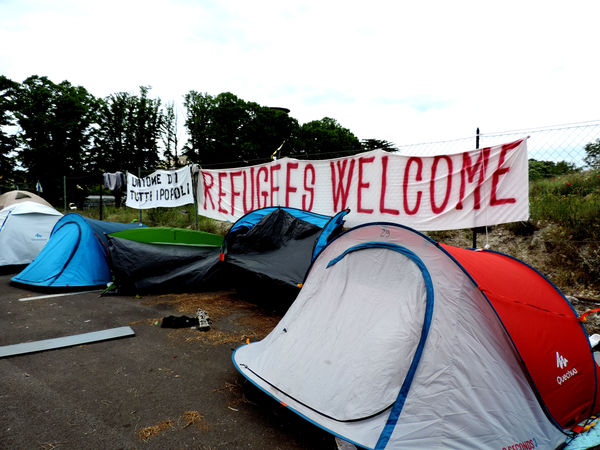 While Yafiat, 20, from Ethiopia talks, one friend sidles up beside him and rests a head on his shoulder, wrapping both arms around his middle and staring up at him closely.

“America … There is justice, but only for their people. Everyone does not look like that man. When you come from other country, there is no hearing your voice,” he says. 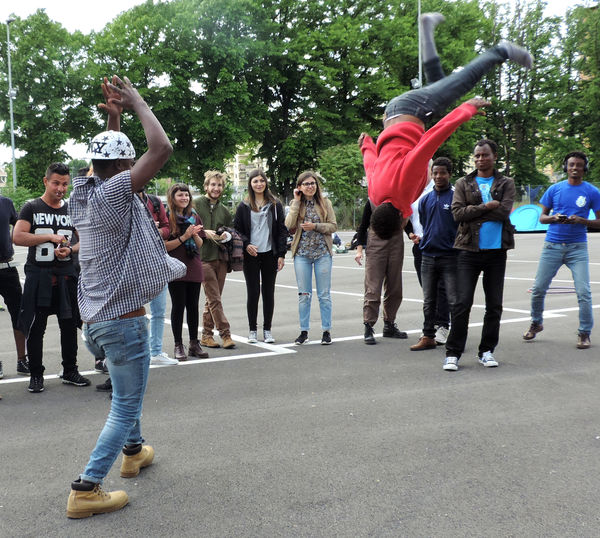 Mohamed, 24, from Somalia, stops mid-sentence to bat away friends who have jumped on his back in a surprise ambush. He pushes them off, throwing pebbles at their retreating figures and yelling good-naturedly. Laughing, he turns back to me. 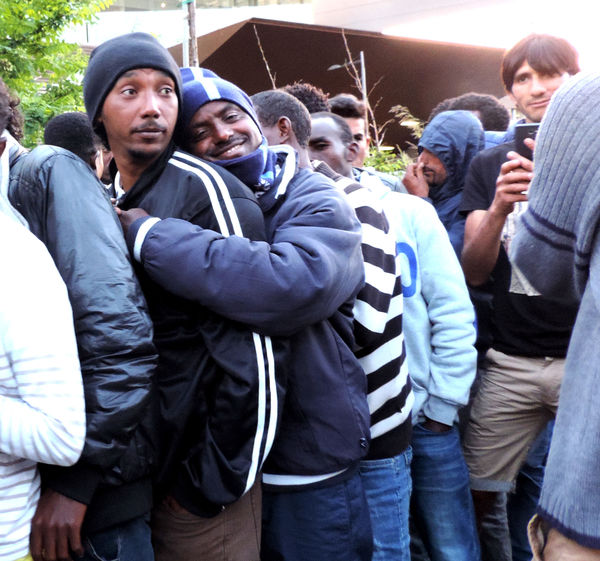 “Our Ethiopian country, we are not having problem like Europe. Only maybe we have economy and crimes but not other things. We respect each other, Muslim or Christian we don’t have any problem. So I think it’s better.”

“So you think Europeans are wrong to have that fear?” 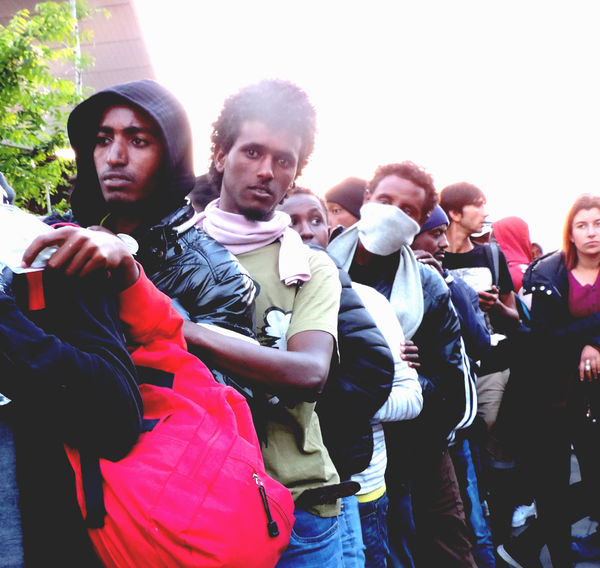 Diallo, from Guinea, is only 18. While he answers my questions he peers through the viewfinder of my camera, photographing me with my notepad and grinning to himself at having flipped our roles.

“So if someone told you that you wouldn’t say anything?”

“I wouldn’t respond anything. I don’t respond, I stay calm, because it’s not my country.” 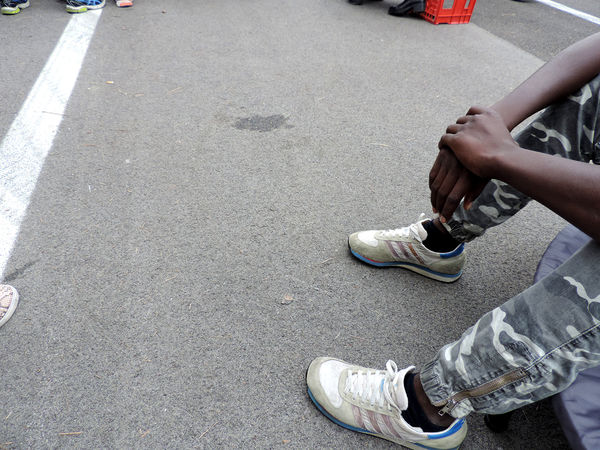 Yafiat, 20, from Eritrea, is ignoring the soccer game beside him growing increasingly more rowdy, instead focusing intently on a crumpled few pieces of paper on which he is practicing arithmetic with the help of a small golf pencil he has found. 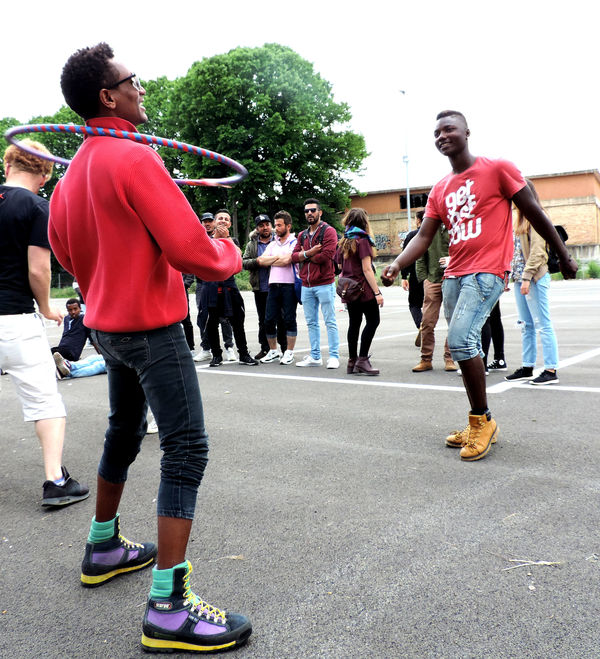 “I want only a good future, a normal future, like everyone.”

“Before you knew you would leave your home country, what were your goals for the future?”

“I have my goals for a long time. I will do it, either here or there.” - Mahmud, 21, from Libya, is studying physics. He plans on becoming a professor. 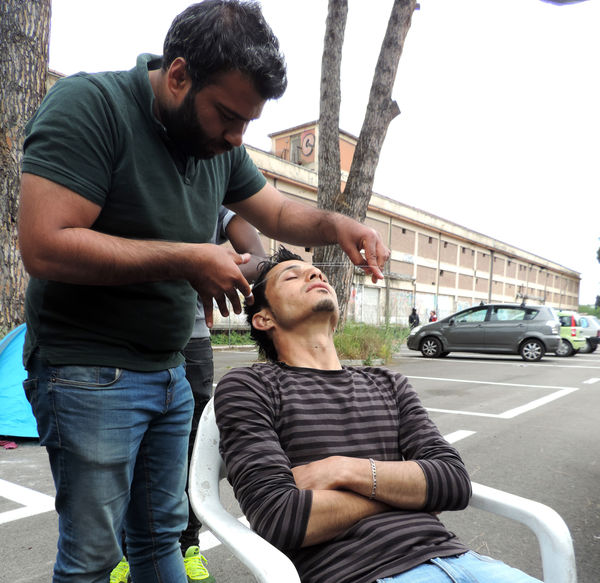 Broken English can often make a foreigner speaking impressively advanced, yet naturally imperfect, English sound dumb. But every refugee I spoke with was at least trilingual. Ramadan, for example, spoke English, Norwegian, Swedish, Somali and Arabic — to name just a few. 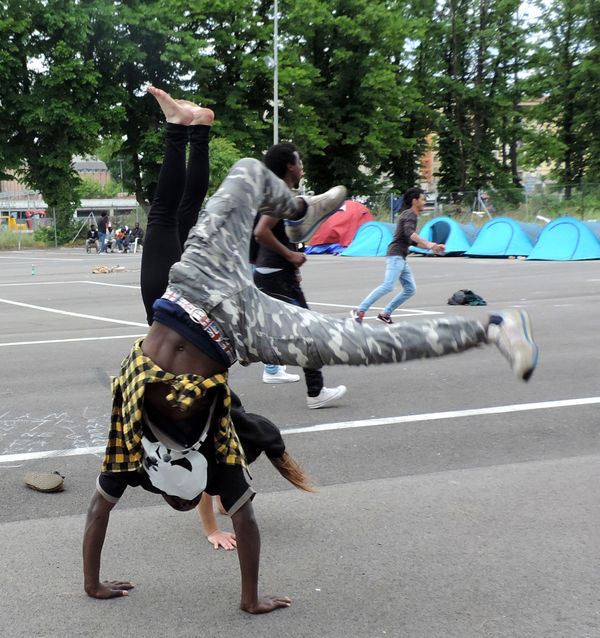 Mohamed is the stylish one. Everyone calls him the “model of the camp.” Humble as anything, he nods and stretches a leg out to model the first time I meet him. He wears skinny jeans, haute red-rimmed glasses and a haircut that can only be described as ‘hipster.’ Solomon, 20, from Ethiopia, came to Italy “to learn everything.” A group of friends in Baobab have just been named finalists in a competition to make the best-tasting soup. 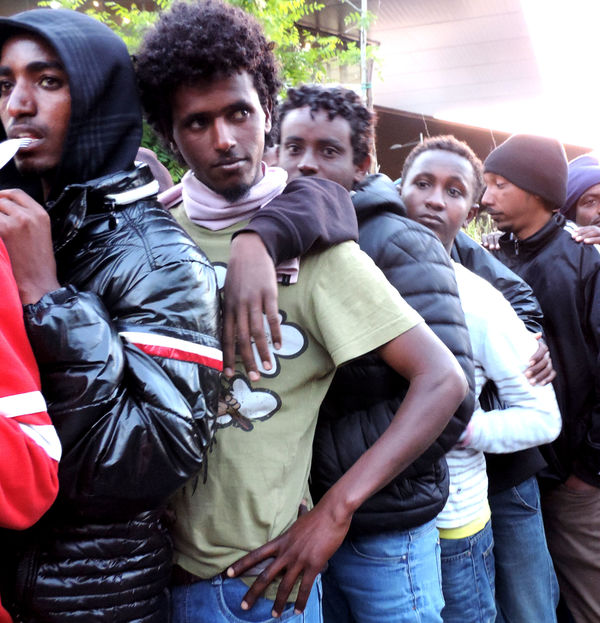 After Mustafa and Yafiat take turns doing back flips off of each other’s knees, they see me watching them, uncross my arms and pull me into their circle against my will. They try to teach me to break-dance too. (They do not succeed.) 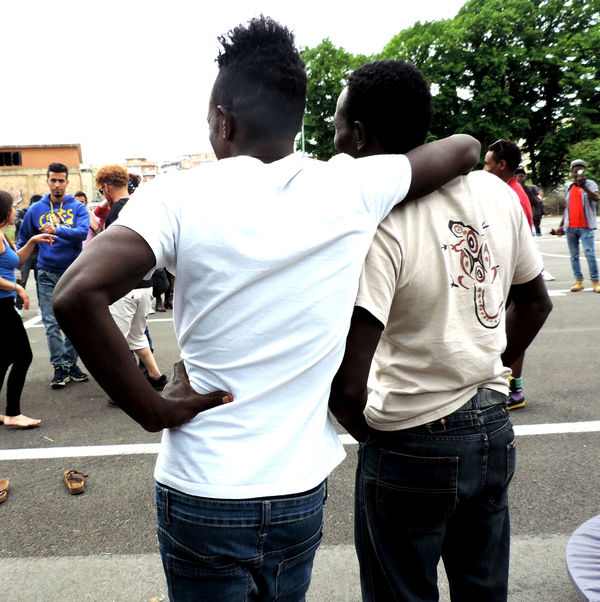 “I love America. It is my dream country,” Mohamed says. “But with Donald Trump I cannot move. Here, I don’t feel like immigrant — I feel like Italian. I love the Italian language. I’m young. I’m gonna do my life. Because I must do a good life and find a family.”

He pats the back of a passing friend. “This guy here, he help me, now I’m one of his family. Cause if someone help you, you must help them,” he says.

“Know the stories,” Alonso-Lasheras says. “Just think a little bit about your history. It’s true for anyone in the United States … it’s going to be very easy to arrive to a moment in which your great-great-great grandfather was not born in the United States. It changes your whole perspective of how you see refugees. They’re just like us. That’s the thing I think people do not realize. They are like us.”

“Meet refugees as persons and realize they are people. That changes your perception. To do that you have to come across your fears.”