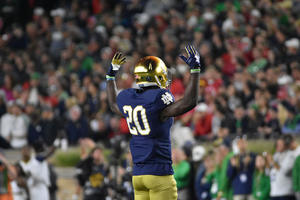 Player of the Game: Justin Yoon

When the clock showed triple zeroes on Sept. 9, the one-point difference between Notre Dame and the University of Georgia Bulldogs seemed defining.

The contest proved to be a back-and-forth battle driven by defense, penalties and special teams.

Georgia gained the lead with 3 minutes and 34 seconds remaining by way of the foot of Georgia kicker Rodrigo Blankenship, a former walk-on who won a scholarship earlier that week.

Following Blankenship’s kick, the “Dawgs” forced the Irish into a three and out, and then the Irish forced one of their own.

With 1 minute and 50 seconds on the clock, the Irish offense led by sophomore quarterback Brandon Wimbush took the field with a chance to win.

With 1 minute and 27 seconds left, the Irish left the field following a Wimbush fumble at the hands of a Davin Bellamy blindside strip-sack.

Notre Dame had hung around on the leg of its own kicker, junior Justin Yoon. Yoon put four of his four field goal attempts through the uprights.

Beyond Yoon, the Irish offense struggled to overcome the stout SEC defense. Wimbush threw for 210 yards on 40 attempts. In his second start, the quarterback scored Notre Dame’s only touchdown on a one-yard run. He also lost two fumbles.

“All 11 positions, all the guys [on Georgia’s defense] were really physical and had speed,” Wimbush said.

Meanwhile, Georgia rode in behind a freshman quarterback starting for the first time. Jake Fromm filled in for the injured Jake Eason and proved he deserved to.

Fromm managed the game well, throwing 16 passes of 29 attempts for 141 yards and a touchdown. He turned the ball over twice but his coach, Kirby Smart, praised him. “Good poise. He never faltered,” Smart said.

The Dawgs offense relied on the pounding running of Nick Chubb and Sony Michel, and a big play from freshman DeAndre Swift. This three-headed monster of a backfield would prove vital to Georgia’s success later in the season.

Georgia was called for 12 penalties for 127 yards, while the Irish earned eight flags for 63, including a late-hit by Julian Okwara that was reviewed and upheld to convert a third down for Georgia. Michel scored on that drive to pull ahead 17-16.

At the time, the loss left a bitter taste in the mouth of the Irish faithful. Though they had played tough against what was then the fifteenth ranked team in the country, but couldn’t close the game at home.

Then ranked No. 24, the Irish had squandered a chance to win one of the toughest games of the year at home in front of their fans. Coincidentally, many of those fans watched the game from home, having sold tickets of Dawgs fans travelling north of the Mason-Dixon line for the first time since 1965.

The sea of Georgia red proved to be a factor to the players.

“It definitely means a little more,” Georgia linebacker Roquan Smith said. “Coming up to South Bend, an awesome environment. Then having all these Dawgs fans coming out, showing their support.”

In mid-September, the team was now outside the top 25 and deflated. Though Brian Kelly had two new coordinators, a new strength coach, a new quarterback, the mood felt a lot like the 2016 season all over again.

The disappointment of a one-possession loss felt reminiscent of last season, in which the Irish lost seven games by that margin.

That season, Brian Kelly’s team also lost its three biggest games: Texas, Michigan State and USC. The year before ended with two key losses to Stanford and Ohio State. ND was now 0 for 6 in its last six big games.

Commentators such as Colin Cowherd suggested that Kelly was just another bad loss and a phone call away from losing his job. Sports Illustrated writer Chris Johnson wrote, “If Notre Dame fires Brian Kelly at some point this season or after it, Saturday night will be framed as the beginning of the end.”

In the post-game press conference, when a reporter asked Kelly how he would stop the disappointment from defining the remainder of the season, he responded curtly.

“It’s not going to snowball,” Kelly said. “Next question.”

And he was right.

Kelly’s team would not let things snowball. The Irish would win its next seven games by at least 20 points on the back of its ground game and defense, including a shellacking of old rival USC at home.

Notre Dame and Georgia’s seasons would be defined by their Sept. 9 match-up late into the season as both continued to perform well.

Both would face late season hiccups with bad losses in week 11. Both earned spots in New Year’s Day bowls and win in exciting fashion.

By the end of the season, however, it was clear: The difference between Notre Dame and Georgia’s seasons was far greater than one point.

“Well certainly [I’m] disappointed for my guys. They battled, played hard. Proud of their effort. They continue to do exactly what I ask them to do. The credit should go to Georgia today. They made the plays in critical times.” -Coach Brian Kelly