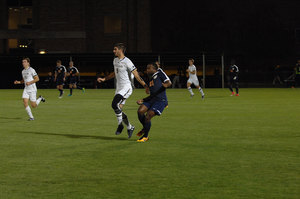 The women’s soccer team enters ACC play with a 6-1-1 record and is receiving top-25 votes in the national coaches’ poll. The non-conference record marks head coach Nate Norman’s best start in his four seasons at Notre Dame. The Irish outscored non-conference opponents 19-6, eight of those goals coming in a shutout win over Detroit Mercy.

Given that the 2021 season is Norman’s fourth at the helm, this senior class is the first to play under Norman for the entirety of their Notre Dame careers. That senior contingent includes forward Olivia Wingate, midfielder Brooke VanDyck and defender Brianna Martinez, who have all started every game so far this season. Senior Maddie Interian gets the most minutes of a rotating lineup of goalkeepers that also includes Kaylin Slattery and Ashley Naylor. The senior class is rounded out by midfielder Nikki Colantuono, who has earned two starts.

The strong start to the season will be put to the test against a tough ACC slate that includes three top-five teams: No. 2 North Carolina, No. 3 Virginia and No. 5 Duke. To add to the grueling nature of the schedule, those three matchups all take place in an eight-day road stretch in mid-October.

The men’s soccer team opened its season with a difficult opponent in then-No. 2 Indiana, ultimately falling to the Hoosiers 3-2 in overtime. The match marked the debut of five Irish freshmen: Josh Ramsey (who also started the game), Eno Nto, Michael Rossi, Matthew Roou and Kyle Genenbacher. Through four games, Roou leads the team in goals with two, followed by Nto, senior Jack Lynn and graduate student Dawson McCartney who all have one. September offers an important acclimation to college soccer for the talented freshmanclass, which will be put to the test against some of the best teams in the country, all on the road: No. 2 Clemson (Oct. 9), No. 4 North Carolina (Oct. 29) and No. 6 Virginia Tech (Sept. 24).

The Irish are led by Chad Riley, a former Notre Dame midfielder now in his fourth season as head coach. The 8-9 record in the COVID-altered 2020 season marked the program’s first losing season under Riley; in his first two years with the program, the Irish made it to the NCAA Tournament, advancing to the quarterfinals in 2018.

The Notre Dame volleyball team recently put up a fight against No. 1 Texas on the road, ultimately falling in four sets. But a strong second set was one of multiple bright spots from the trip to Austin, which also included a five-set, neutral-site win over Arizona. The Irish went 2-1 in their opening home tournament, beating Oakland and Loyola Chicago but falling to No. 16 Western Kentucky. The following week, they lost to all three of their opponents (Bowling Green, Cincinnati and UW Milwaukee) in their other home tournament, the Shamrock Invitational.

The team’s stars return with experience and continue to shine even as the team looks to add to its win column. Senior outside hitter Charley Niego leads the team with 105 kills, while sophomore Aubrey Hamilton, has tallied 95 kills on the season. Senior Zoe Nunez, a setter, is responsible for 242 of the team’s 347 assists.