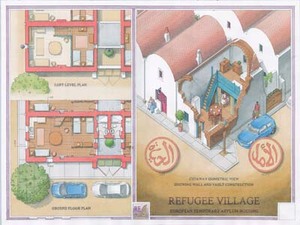 Economakis, Director of Architecture and Urban Design in the School’s Graduate Program, developed a unique and sustainable master plan for temporary housing in the throes of Europe’s refugee crisis.

The plan includes designs for individual housing units built from adobe and wood, furnished simply for short stays while migrants seek asylum from Syria. These housing units surround an adaptable public square. “This is really an attempt to create humane affordable refugee housing for the local governments,” Economakis says of his project.

Inspiration for this project struck the architecture professor on both a personal and a professional level. Many of his family members reside in Greece; Economakis was moved to take action when he heard of his brother’s small Grecian island community coming together to help a troupe of Syrians seeking asylum.

Professionally, he realized the need for a middle ground between sustainability and livability in refugee housing. Economakis’ plan rejects the harsh conditions of refugee shanty towns and the huge landfill waste produced by prefabricated refugee housing units.

“The embodied energy that goes into making those (prefabricated) units is incredible,” Economakis says. “Instead, why not gather some mud, some sand, some water, build some forms and walls?” The building technique is one that Syrians and Iranians are familiar with and has been proven to work and last for hundreds of years in Middle Eastern and Mediterranean climates.

The sustainable genius lies in the potential use for refugee villages once the migrant crisis subsides. The units can be used for resort or apartment housing to turn a large tourism profit for countries that adopt the plan.

“At worst,” Economakis says, “you can knock them down and increase the productivity of the land if you rake the adobe back into the top soil.”

Economakis started working on this project in the fall of 2015 and completed it by the spring of 2016. The Refugee Village Plans won the top award at the International Making Cities Livable Conference in Rome in June of 2016.

The professor’s main focus now is implementing his refugee village, but challenges have arisen. Economakis points to the financial crises in the European Union, citing Italy and Greece’s lack of funds and unwillingness to invest as major obstacles to his efforts. Additionally, the low point of the refugee crisis may be over due to a deal between the European Union and Turkey in which migrants in overfull countries are being sent back to Turkey. For Economakis, this political confusion is causing a bit of “slowness in attention” for the project.

“However, the crisis does continue,” says Economakis. The professor is rebuilding his efforts to promote the project, instead shifting his focus to Middle Eastern “front line countries.” These countries, like Jordan, Lebanon and Turkey, are not in war, but are receiving hundreds of thousands of migrants and refugees. The village plans were purposefully designed for adaption, and can easily be adjusted for a Middle Eastern landscape with minimal change in materials sourcing.

By writing to world leaders, presenting his project to the UN Refugee Housing Division, seeking private funding in land and finances and networking at an institutional level, Economakis is working to see his project come to fruition. “My wish is that this recognition is helpful in getting through to governments,” he says. Ultimately, he hopes his plans can inspire some necessary change.