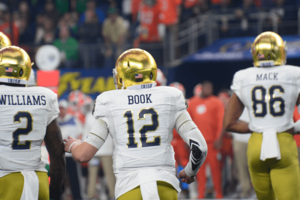 The pressure on No. 3 Notre Dame had mounted nearly as high as the 320-foot-tall roof at AT&T Stadium in Arlington, Texas. Win against No. 2 Clemson, and prove that the Irish could hang with the best; lose, and the national perception of the program sinks right back to the regrettable post-2012 level.

“What I think we’ve been really good at is staying in the moment and treating each game as they have come,” Kelly said in a Dec. 15 press conference. “And we’ll do the same thing here.”

Neither team mustered anything on its first drive, as both ended in punts. Notre Dame’s second possession lasted all of one play, when junior quarterback Ian Book rushed for two yards before Clemson defensive end Clelin Ferrell forced and recovered a fumble on the Tigers’ 47-yard line.

Nine plays and 31 yards later, kicker Greg Huegel converted a 40-yard field goal to give Clemson the first lead of the game with 8:35 remaining in the opening quarter.

The next four minutes comprised what ultimately amounted to Notre Dame’s best offensive possession of the game. Facing third-and-10, the Irish notched first downs on consecutive plays — the first on a 16-yard pass to senior running back Dexter Williams, the second on a pass interference penalty drawn by senior wide receiver Miles Boykin.

Now in Clemson territory, Book connected on consecutive passes before rushing for a first down to the Clemson 17-yard line. The drive stalled inside the 10-yard line, however, and senior kicker Justin Yoon evened the score at 3-3 with a 28-yard field goal.

That tie held into the second quarter, when Notre Dame suffered the first injury all season that it could not overcome. During the regular season, graduate student linebacker and captain Drue Tranquill had gone down multiple times, and Notre Dame responded. Same with sophomore running back Jafar Armstrong and Book. But when junior cornerback Julian Love left with a head injury in the second quarter, any hope Notre Dame held of reaching — or winning — the national championship all but left with him.

“It hurts,” Love said after the game. “It was hurting me internally because I, obviously, wanted to be out there. I wanted to help our team. And in a sense, I let them down in that regard.”

The Tigers took possession a minute into the second quarter after the Irish failed to convert on fourth down at Clemson’s 34-yard line. Two plays later, freshman quarterback Trevor Lawrence delivered a strike to fellow freshman Justyn Ross — who beat junior cornerback Donte Vaughn, Love’s replacement — for a 52-yard touchdown. Huegel’s PAT was blocked by senior defensive tackle Jerry Tillery, keeping the score at 9-3 with nearly 13 minutes to play before halftime.

Any team playing such a potent offense as Clemson’s, as Notre Dame found out the difficult way, must be nearly flawless on offense in order to keep up. From the second quarter on, Notre Dame’s offense was about as far from flawless as possible.

Meanwhile, the Tigers added two more touchdowns in the final two minutes before halftime. With 1:44 remaining in the second quarter, Lawrence extended Clemson’s lead to 16-3 on a 42-yard connection with Ross. Just 100 seconds later, Lawrence finished off a four-play drive — helped by two Irish penalties — by lofting a pass to the corner of the end zone. Vaughn deflected the pass, but sophomore wide receiver Tee Higgins defied most physical principles to catch the ball with one hand while staying in bounds for the touchdown.

Trailing 23-3 at halftime, the Irish had run 37 plays for 141 yards (3.8 yards per play). Clemson had run only four more plays but at 306 total yards — including 264 through the air by Lawrence — had more than doubled Notre Dame’s output.

Two plays after safety Nolan Turner intercepted Book deep in Clemson territory midway through the third quarter, Clemson faced third-and-1 from its own 38-yard line. Running back Travis Etienne, held to just 33 yards on 11 carries until that point — burst through the Irish defense for a 62-yard touchdown, taking a commanding 30-3 lead and sealing Notre Dame’s fate.

Despite the result on the scoreboard and the stark discrepancy in the final stats — including Clemson outgaining Notre Dame 538-248 — Kelly left the stadium disappointed but confident in the team’s future outlook.

“We’re in here licking our wounds after being one of the four teams,” Kelly said after the game. “That’s a good place to ... take restock and get stronger from it. We’ll get better because of this. Our guys saw that [they] could win a game like this. And we’ll go to work on that.”

“I did not feel like there was an overwhelming difference in terms of talent,” Kelly concluded. “They have extremely talented players. They were the better team today. There’s no doubt about it.”