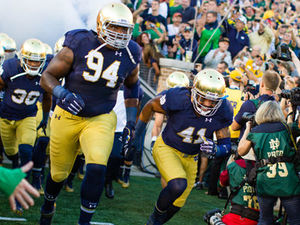 There has been a great deal of talk about a crumbling Notre Dame defense over the past few weeks. The Irish have surrendered at least 30 points in each the last four games. Sure, there has been a drop-off in production from a top five scoring defense following the Stanford victory, but here’s why this program will be just fine moving forward.

This is only year one. The transition from the 3-4 under Bob Diaco to the 4-3 under first-year defensive coordinator Brian VanGorder hasn’t been completely smooth, but there has been clear growth throughout this season. The Irish have benefited from the emergence of new contributors to build on, as well as an identity of aggressiveness, toughness and quickness. 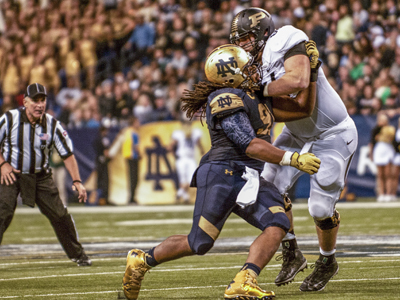 A large part of the Irish’s ability to generate 16 sacks and 13 interceptions in 10 games can be attributed to the pass rush. VanGorder has been known to bring heavy blitzes and allow his speed up the interior and off the edges to match up against the opposing teams’ offensive lines.

VanGorder’s pedigree suggests he will figure it out. He is well travelled across the different levels of competition. He began his career as the linebackers coach at Grand Valley State after a playing career at Division II Wayne State. Brian Kelly also was the head coach for Grand Valley State in the 1990s and elevated VanGorder to the team’s defensive coordinator, his first appearance as the head of a defense.

VanGorder got his big break in the early 2000s as the defensive coordinator for Georgia. Success followed him from the SEC into the NFL. He has appeared in the NFL ranks with the New York Jets and the Atlanta Falcons. In just one offseason, he has been able to tackle the challenge of coaching an incredibly young group that featured no seniors in the starting lineup against Arizona State.

The youth of the personnel warrants buzz and anticipation for a standout 2015 defensive unit. Two linebackers, leading tackler Joe Schmidt, who suffered a season-ending ankle injury, and Preseason All-American Jaylon Smith, have led the charge for much of the season as playmaking defenders in space. The two leading tacklers will return to the team next year. Suspended standout cornerback KeiVarae Russell will also return to the team.

Nyles Morgan is a talented freshman that is now gaining valuable experience as the future of the middle of the defense. Sophomore safety Max Redfield and junior safety Elijah Shumate have played in every game this season. Sophomore Cole Luke and junior Romeo Okwara lead the team in interceptions and sacks respectively. Freshmen Drue Tranquill, Andrew Trumbetti and Kolin Hill have played in momentous situations in just their first seasons on campus. 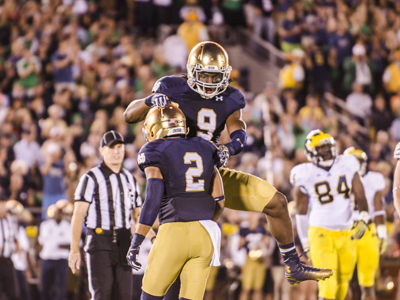 Although the Irish have allowed nearly 35 points per game this season, turnovers on the offensive side of the ball have certainly not helped their cause. It’s never easy for any defense to play with its back against the wall, and because of costly interceptions and fumbles on the offensive side of the ball, Notre Dame has been forced to prevent scores in the short field. The Irish have fumbled the ball 15 times and have thrown 11 interceptions, which keeps the defense on the field instead of resting on the sideline.

In order for the Irish to finish the season with double-digit wins, which should be the goal at this point, the defense must limit the opposing team’s scoring. Matchups against Louisville and USC won’t be easy. VanGorder must dial up effective blitzes, and the Irish must get back to their front seven stymieing the opposing team’s offense in order to finish out the year unscathed.