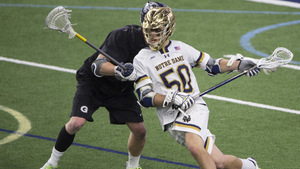 For Notre Dame and college lacrosse fans alike, Mikey Wynne’s third quarter, man-up goal against Georgetown in the Irish’s season opener looked all too familiar. Not only because it featured Wynne burying yet another close-range opportunity, but because of the left-handed pass from a certain #50 that led to it.

Up 8-5 with 9:41 left in the third quarter, the Irish were in the middle of an offensive assault against the Hoyas in their opening game of the 2017 season. Their eight minute outburst catapulted them from a 6-5 lead to a 13-5 lead. And as Irish fans have come to expect in recent years, a crafty lefty sporting #50 was leading the charge.

I am a manager for the men’s lacrosse team, and while most recognize Garnsey as the slick freshman from a year ago, whose 39 points earned him ACC Freshman of the Year honors, I still see him as #21. This year, however, he’s wearing the number of his mentor and former teammate, Matt Kavanaugh.

After a long conversation following their season-ending loss to North Carolina in the quarterfinals of the NCAA, Garnsey and Kavanaugh (known to teammates as “Kav”) decided Garnsey should make the switch to #50.

“It was something I wanted to do,” said Garnsey. “Obviously, I’m not going to be Kav or replace what he did. But [wearing the #50] is a reminder that, when I don’t feel like going to practice and I’m tired, I’ve got something else that I’m playing for.”

“Our expectations are to make our team the best offensive team possible,” says Wynne. “We believe we have one of the country’s top attack units and we can make an impact for the year.”

The road ahead is far from easy, as the Irish are tasked with one of college lacrosse’s most difficult schedules. Away matchups with Denver and Virginia, and home bouts against Maryland and North Carolina highlight a schedule full of perennial powerhouses.

For the attackmen specifically, Wynne believes their intangibles will lead them through their tough regular season slate and deep into May. “Playing with a majority of these guys for over a year has been big for developing trust,” says Wynne. “We constantly are communicating with one another and helping each other improve. No one is above criticism and everyone is held accountable.”

Garnsey learned much from Kavanaugh on one particular topic, on how to hold yourself accountable and set an example. Arguably the most skilled of the bunch, Garnsey desires to become a leader amongst the attackmen, having been inspired by his mentor.

“I took away a lot from [Kavanaugh] on the field, but taking away the leadership abilities he had was critical,” says Garnsey. “He had so much to teach me on how to conduct yourself in practice, on the field, and on road trips.”

Garnsey says learning those leadership qualities, as well as the technical skills, from Kavanaugh were equally important. He will need both to elevate the attackmen and accomplish their mission of becoming the country’s top unit.

Two games into the season, that objective has become a reality. The Irish have tallied 16 goals in each of their first two games. In that time, 11 different players have contributed to that sum. Garnsey leads the squad with 12 points (total goals and assists) and Wynne holds the second spot, earning eight points.

A balanced attack, coupled with a stout defense, has propelled the Irish to a 2-0 mark this season. But the road only gets tougher from here on out.

If the Irish are continue their early success, expect that crafty #50 and his fellow attackmen to be leading the charge deep into May.