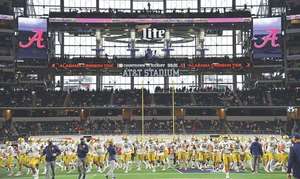 For the first time in over 27 years, Notre Dame football defeated the No. 1 ranked team in the nation with a thrilling double-overtime victory over the Clemson Tigers.

With two playoff berths and a national title game appearance in the past decade under head coach Brian Kelly, the past 10 years have been a welcome development for Irish faithful who have longed for national relevance that has been missing since the Lou Holtz era. Yet even in these successful seasons, Notre Dame has struggled to perform under the brightest lights against the toughest opponents and has consistently suffered crushing embarrassment. The 2012 national championship versus Alabama? 42-14 rout. The 2018 playoff semifinal versus Clemson? 30-3 blowout. Whenever the heat was turned up, Kelly’s Irish cracked like brittle clay.

That was why, at the time, this win seemed so cleansing. Years of disappointment washed away in the gleaming waters of primetime victory. The Echoes finally had reawoken. The Rockne statue seemed to smirk in smug pride. Across the nation, Irish eyes were smiling. Notre Dame was surely back, right?

After the game, I planned on a gloriously optimistic column extolling the return to prominence and arrogantly pontificating on the certainty of a coming Kelly dynasty. Then the spinout in the ACC Championship Game happened. Then the Irish were forced to dance with that most grim of grim reapers, Nick Saban, in the Rose Bowl Playoff Semifinal. Now it feels like the program  is  back to square one. Yet, with defeat still fresh, it is important to recognize just how far Notre Dame has come.

In recent years, Notre Dame football has undergone a modernizing makeover. The new turf field is no longer the same hallowed grass upon which Raghib “The Rocket” Ismail’s cleats pounded as he returned yet another kickoff for six. The jumbotron is not the same charming scoreboard that read out the final score when Manti Te’o’s defense held the line to cement their undefeated season. If these walls — repainted and renovated — could talk, they would have nothing to say of the long and winding history they have replaced. Such unprecedented change at a program so rooted in tradition means the mythos which once anchored its identity must be revitalized in order to inspire a new generation. That legend, if only for a brief moment on the night of Nov. 7, emerged reborn.

This double-overtime victory over the Tigers, while framed by a disappointing end, still holds considerable weight in the pantheon of Irish lore. This accomplishment heralded a new, revitalized epoch for a Fighting Irish program on the brink of arrival to the national stage. It further provided a stage for Ian Book to leave his indelible mark on the history of Notre Dame football. In accruing a 30-3 record as starter, the title of the all-time winningest quarterback in school history and serving as the instrumental piece to two playoff berths, Book is an Irish legend. He laid the foundation for what is hopefully the long-awaited awakening of a dormant powerhouse, and on that fateful November night in South Bend, he had his heroic moment beneath the lights. Now, it is someone else’s turn to take the mantle and push on.

While ultimately disappointing, four straight 10-win seasons and two playoff appearances in three years means Notre Dame is marching in the right direction. Keep pushing on, and eventually, in Brian Kelly’s words, “we’re gonna break through.” For a brief moment on the night of Nov. 7, Irish fans were granted a hopeful window into that future.