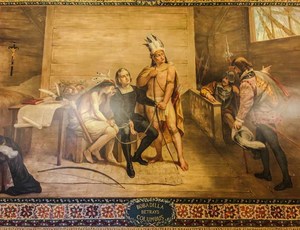 Rising on either side of the main entrance, Luigi Gregori’s 1884 Columbus murals greet all visitors to the University in an array of almost reverent majesty. Guests and students alike lower their voices and soften their footsteps as the grandeur sinks in: the high-arching dome, the historic architecture and the evocative image of an American hero taking in the promise of a new world. It’s enough to make anyone feel dwarfed in museum-like silence.

Standing next to these murals, close enough to see each delicate stroke of the Vatican’s brush, the words that Columbus first penned into his log upon meeting with the Arawak men and women of the Bahama Islands seem shockingly out of place:

“With fifty men we could subjugate them all and make them do whatever we want.”

And so he did, as Howard Zinn evaluates in his famous “A People’s History of the United States.” In fact, you don’t have to look much further than the first page to realize that, while the murals suggest religious heroism and adventure as the driving factor behind the expedition, Columbus’ journey was far more motivated by the Spanish monarchy’s promise of 10 percent of the profits, power over the newly claimed lands and the title “Admiral of the Ocean.”

According to Professor Eric Haanstad, director of undergraduate studies in the Anthropology department, Columbus’ own words document a history of violent consequences for those he encountered.

“The murals are based on a fantasy of Columbus that is displayed as an artistic reality,” he says.

These faux fresco images blatantly present an interpretation of history that hides the brutal enslavement and tragedy the Arawak, Taino and other Native American people experienced with the ‘discovery’ of the ‘New’ World. In an effort to mask the violent reality of Columbus’ arrival, Gregori’s “Taking Possession of the New World” is now called “Coming Ashore,” a far less aggressive and far more misleading title for the piece.

Perhaps it’s a bit ironic that these murals lie directly above the university’s greatest honor bestowed upon American Catholics — the Laetare Medal, whose inscription reads, “Truth is mighty, and it shall prevail.”

Many would argue that these murals take a rather offensive stance in our modern world, especially for students of Native American descent, who see the homogenous typecasting of a diverse and widespread culture costumed in historically inaccurate garb. The question now is: what to do about them?

In 1997, a committee was appointed to issue a brochure explaining that the university does not see the Columbus murals as an accurate representation of its values. This pamphlet has since been discontinued and extracted from circulation.

Currently, the murals stand on their own, continuing to revere a man who began a centuries-long Eurocentric imperialistic movement that an undefended America could not anticipate.

Nevertheless, “claiming they are simply Eurocentric denies our responsibility for them,” Professor Haanstad says.

We are responsible for perpetuating falsehood, while our mission statement reads, “the University is dedicated to the pursuit and sharing of truth for its own sake.”

According to Ms. Iris Outlaw, director of multicultural student programs and services, integration and the welcoming of diversity have become major goals for the university in the past few years.

“We have to be aggressive,” she says. “Cultural competency needs to become a main piece of our conversation. Something we all understand and can integrate into our daily lives.”

Although Ms. Outlaw says an early 90’s effort to remove the murals revealed they could not be extracted without structural damage to the Main Building, she agrees that the murals do not represent our community and what we stand for.

Even if extraction isn’t possible, I believe action must be taken to address the nature of these murals. How can we celebrate Race Relations Week and welcome exhibits such as Native Voices to our campus without acknowledging the hypocrisy of these images?

The school should draft and distribute a new brochure that accurately pinpoints the historical inaccuracies of the murals, and if possible, we should replace the murals with a better depiction of who we are as a community and how we want to be perceived. These murals represent an unfavorable part of our past and shouldn’t be denied. But we cannot allow them to remain and elicit respect and admiration.

These murals are not harmless remnants of an ignorant past. They are active participants in reaffirming an ongoing fantasy. It is time to take responsibility for the damage they have done and continue to do.