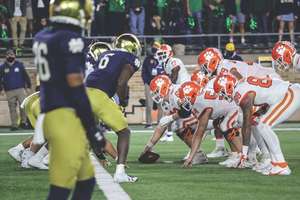 Yet, with wounds still not yet scarred over from the 30-3 defeat to the Tigers in the College Football Playoff two seasons ago, Notre Dame (7-0, 6-0) knocked off Clemson (7-1) in a 47-40 double-overtime thriller that put an end to college football’s longest regular season winning streak and the idea that Notre Dame couldn’t compete with the best of the best. The win was Notre Dame’s first against a No. 1 team since beating Bobby Bowden and Florida State in 1993, and head coach Brian Kelly’s first win over a top-five team.

From the moment the sky above Notre Dame Stadium lit up green with fireworks prior to kickoff, the night felt special for the Irish. Then, Kyren Williams ran 65 yards for a touchdown on the first play from scrimmage, and that feeling blossomed into belief. By game’s end, Williams totaled 140 yards and three touchdowns, the final two scores coming to tie and then take the lead in the two overtime periods. For the seventh week in a row, Williams and the Irish ground game (209 total yards, 5.1 yards per carry) couldn’t be stopped.

The Irish played their best overall game when they needed to against the best team on their schedule. For weeks the offense was hindered by an inconsistent and sometimes nonexistent passing game. Saturday night, quarterback Ian Book led his team to a victory that nobody with any interest in Notre Dame will soon forget. It was a career-defining moment for Book, who later became the winningest quarterback in Notre Dame history.

In the final minute, with the Irish trailing 33-26, the two-time captain led his team on an 8-play, 91-yard touchdown drive for the ages to send the game into overtime. The drive culminated with a 53-yard strike to senior Avery Davis over the middle that set up first and goal. It was exactly the type of play Notre Dame had been criticized for not making all season long. Three plays later, Book found Davis again for a four-yard score to tie the game with 22 seconds left. Book then led two game clinching drives in overtime, the first to force a second OT followed by what proved to be the go-ahead, both of which ended with Williams scores.

This is especially remarkable given how sideways things had gone leading up to the game-tying drive in regulation. Late in the third quarter with the chance to take a 30-23 lead, Book fumbled at the goal line and Clemson recovered in the end zone. The Tigers then went on a 10-0 run and took a 33-26 lead on a 3-yard Travis Etienne run with 3:33 remaining. The drive before the game-winning drive for the Irish ended with a turnover on downs near midfield after four incompletions in a row.

Book, who has held a stoic confidence in the face of nearly incessant criticism his entire career at Notre Dame, showed resilience in that final drive. He had cost his team points, consecutive drives prior were fruitless and the lead had evaporated, but Book never wavered, finishing with 374 total yards of offense.

After the game, Book recounted, “He [Brian Kelly] came up to me and said, ‘You’re gonna win this game. This is your game to win, and you deserve it and it’s time,’ and I 100% believed him. I believed we were gonna win this game from the beginning. Just to have his confidence and just to have him behind me like that, it just means a lot. This was a huge game for myself, but also for this whole entire team, and he didn’t give up, this whole team never gave up and there was not a moment where I didn’t think we were gonna win.”

Clemson may have been without exceptional quarterback Trevor Lawrence because of COVID-19 protocols, but freshman quarterback DJ Uiagalelei didn’t miss a beat, throwing for 439 yards and two touchdowns. While that definitely isn’t a recipe for beating a No. 1 overall team, holding the ACC’s all-time leading rusher Travis Etienne to just 28 yards on 18 carries is. In making Etienne and the Clemson run game a non-factor, the Irish defense kept the team in the game. A 23-yard fumble return touchdown from senior linebacker Jeremiah Owusu-Koramoah in the second quarter also proved to be the difference.

The game ended in a sea of green with a few gold specks, Notre Dame’s student body choosing release over restraint and engulfing players on the field after Notre Dame football’s biggest win in nearly three decades.