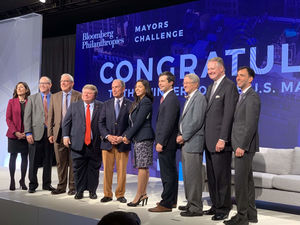 South Bend was awarded $1 million in grant money on Oct. 29 as one of nine cities that won the Bloomberg Mayors Challenge, a year-long competition to “empower U.S. cities to generate innovation” and solutions to problems across multiple spheres.

South Bend will use the money to expand upon a ride-sharing program, launched as part of the initial stages of implementing the challenge in February, for low-income and part-time workers with unreliable transportation options. According to a press release from the South Bend mayor’s office, 35 percent of low-income workers in South Bend cite lack of reliable transportation as the primary barrier to finding and maintaining employment.

“A big part of what we’re trying to address is uncertainty and vulnerability to disruption,” Mayor Buttigieg told the South Bend Tribune. “We know from a lot of evidence that the lower income you are, the more likely it is that a simple mishap, from a medical issue to car problems can seriously disrupt your life [and] cost you your job.”

The pilot program, spearheaded by the South Bend Department of Innovation & Technology, aims to make it easier for employees to get to work consistently by partnering with four local businesses — Beacon Health System, South Bend Venues, Senior1Care and the University of Notre Dame — with the ride-sharing company Uber. Participants can independently schedule rides that are charged to the program.

Transportation has been a known problem for some university employees, according to Jessica Brookshire, Associate Director for Public Affairs. Supervisors shared stories of individuals “spending a lot money to get to work, arriving late or calling off due to transportation issues prior to starting the pilot.” University pilot participants included 68 staff members working in South Dining Hall and the Morris Inn. These employees were chosen because the departments “include a variety of different work shifts, many of which occur when public transportation is not available,” Brookshire said.

Carole Muturi, director of operations at Senior1Care — a company that helps to provide caregivers to the elderly — recounted similar transportation obstacles faced by employees: “I see the challenges of our caregivers ... Some of them do not have rides; they depend on somebody else for a ride and when that ride is no longer available, they quit work and we never know what happened.” Senior1Care saw benefits from the pilot program on many fronts: for one, the company was able to hire employees that did not have their own methods of transportation. As a result, call-off rates decreased and clients maintained consistent caregivers.

Program data collected by the South Bend government revealed significant reduction in absences and late arrivals, two primary predicted metrics for turnover — which employers commonly identified as their greatest problem. Not only were employees getting to work reliably, “They were able to work more hours on average. So, whether that was just an extra hour in the same day because transportation time was significantly reduced, or, in the case of many, the ability to take on additional shifts,” employees were able to increase their opportunities for take-home pay, according to the pilot’s program manager Genevieve Miller.

Moving forward, the government aims to enhance and expand upon the program. One current restriction is the requirement that participants must have access to smartphones to utilize the program. The government hopes to address this by partnering with services such as GoGoGrandparent that allow for users to request transportation from ride-sharing companies through only a phone call.

Pilot results also revealed that only a small population of employees faced chronic transportation problems. Because the participant population had already been maintaining employment, they found the most utility when using the ride-share program as a backup when issues arose with their primary mode of transportation. In order to widen the program’s radius of effectiveness, the government is actively seeking partnerships with additional transportation providers. “Our number one goal moving forward is to make sure this is a multi-modal transportation solution,” Miller said. She also emphasized the intent to scale up the program so that it can “ultimately serve a much larger group of employees in South Bend.”

The pilot initialized the problem-solving process, but employers are hoping for something more permanent. The program “was kind of like a Band-Aid,” Maturi said, “but we need a long lasting solution to the transportation situation.” Hopefully, with the aid of $1 million, the city will be able to create that.