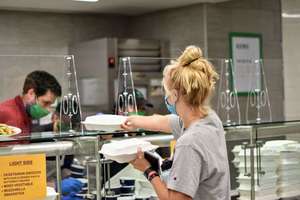 When sophomore James Gilman went to North Dining Hall for the first time this semester, it wasn’t at all how he remembered it. “My first meal back on campus was a box of lettuce topped with one cherry tomato,” he said.

Gilman is not alone in this sentiment. Similar stories of blasé eats abound at Notre Dame since the start of the semester, when Campus Dining introduced new policies and procedures to accommodate the ongoing pandemic. The temporary suspension of in-person classes and the transition to remote instruction have only further complicated this reopening.

“Last semester, I would frequent the dining halls twice a day, on average,” Gilman said. “This semester, I often go only every other day.”

This dip in attendance reflects what many students believe to be a dip in the quality of meals. Notre Dame, whose food is consistently ranked among the best in the country, switched this fall from a self-serve, all-you-can-eat buffet to individually boxed pre-prepared portions.

When a student arrives at either of the university’s two dining halls — referred to simply as “North” and “South” — they’re met by a gaggle of HERE Ambassadors, a new subset of the Notre Dame staff who patrol public spaces and uphold reopening rules. During the busiest hours of the day, students are directed through a long line of glass dividers, weaving their way through what used to be indoor seating. It’s not unlike the waiting queues you see at Disney World.

Once inside, students are free to roam from station to station, observing displays of what they might see inside their carry-out orders. All food is pre-packaged into biodegradable paper boxes, although bags, utensils and condiments come only in plastic.

Upon exiting, students can take their food to one of many marquee tents on campus. Some students bring picnic blankets and eat on the green, while others take their food back to their rooms. No matter where they go, many are disappointed by what lies inside their boxes.

“I remember during the first weekend one of my dorm mates got a chicken sandwich and fries, and when he opened his box there were only three fries in it,” said sophomore Matt Smith.

Perhaps anticipating a mixed response, Campus Dining has supplemented its 250 standard dining hall swipes with $200 extra in Flex Points, which students can spend at on-campus restaurants like Smashburger, Starbucks and Subway. But changes to these services present problems of their own: adjusted hours have made restaurants inaccessible during popular times, dining at Duncan Student Center has closed indefinitely and GrubHub has proven to be only so reliable.

“I’ll order food and get there by the time the app says it’ll be ready, and instead I’ll have to wait 20-30 [more] minutes,” Smith said.

The new policies have also left the quads overflowing with garbage. “I couldn’t and still can’t believe how much waste [the dining hall situation] is producing,” said senior Lauren Caffarelli.

Caffarelli, who has food allergies, said the changes to Campus Dining have made it difficult for her to keep up with her dietary restrictions.

Sophomore Scott Lucitt, who can’t eat gluten, is in a similar boat. He says that although the dining halls provide a gluten-free option, they lack the variety they previously had. “With pre-packaged meals and no access to a gluten-free section, I have had chicken tenders and salads most of the time.”

Despite these drawbacks, every student interviewed expressed understanding toward the Notre Dame administration, as well as the unusual circumstances to which they have had to adapt. Additionally, every student agreed that the quality of meals has tremendously improved since the first few days of the semester.

“It seems like Campus Dining actually took the suggestions and feedback of students into account,” said junior Lily Brouder, “which is nice to see.”

North has come a long way since Gilman’s lettuce and tomato. “This week I’ve begun to see improvements,” he said, “including the return of the Southwest Salad!”

How the dining halls will continue to adapt and enhance the new student dining experience remains to be seen.