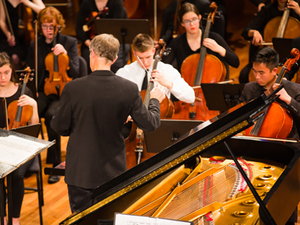 Several campus music groups gathered to perform a concert in honor of the bicentennial of university founder, Rev. Edward Sorin, C.S.C., in the DeBartolo Center for the Performing Arts Center on Nov. 21. Performers participating included the Symphony Orchestra, the Glee Club, the Liturgical Choir, the Women’s Liturgical Choir, the Celebration Choir and associate professor of piano John Blacklow. The concert program consisted of three selections by Beethoven.

Senior Paul Kearney, Glee Club president, was excited to participate in the performance.

“As a 100 year institution on this campus, the Glee Club is always looking to take part in great university events such as this concert. The performance was a truly rewarding experience for everyone involved,” Kearney says.

The concert served as a way to mark an important milestone, from the first crash of the timpani to the final “Amen.”