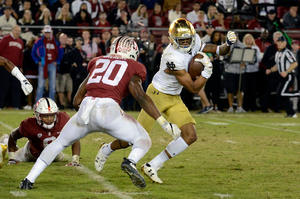 Two weeks after a blowout 41-8 loss to Miami, and one day after that same Miami team was dealt an embarrassing blow by unranked Pittsburgh, No. 9 Notre Dame’s hopes of a top bowl officially ended at the hands of the No. 20 Stanford Cardinal.

In a weekend filled with upsets, irrevocably altering the playoff rankings as bowl announcements quickly approached, Notre Dame was not immune to this trend.

The majority of the game was a tight match-up between the Fighting Irish and Cardinal. Each team continuously met the other’s advances — in points, rushes tallied and flags thrown.

Stanford won the toss and elected to receive. Notre Dame, however, was the first to register points, as quarterback Brandon Wimbush threw an 83-yard touchdown to Kevin Stepherson with 3:40 to go in the first quarter. The play capped a 3-play, 86-yard drive and was Notre Dame’s longest pass since 2010.

The Cardinal answered with 50 seconds left in the opening quarter, with K.J. Costello finding Trenton Irwin for a 29-yard touchdown. With 11:29 to go in the second quarter, Costello would throw for his second touchdown in the game, with a 4-yard pass to JJ Arcega-Whiteside. Before the half was over, Justin Yoon kicked a 38-yard field goal to cut the Stanford lead to 14-10.

On the first play of the second half, the Irish came out of the tunnel with an extra kick in their collective step. Equanimeous St. Brown took a short pass from Wimbush and darted upfield, not stopping until he reached the end zone. The 75-yard catch-and-run marked the only play of the 12-second drive, as well as Notre Dame’s first game in its storied history with two passing touchdowns of 75 yards or more.

Stanford looked to answer almost immediately with a 31-yard rush, but ultimately only kicked a field goal, leaving the teams deadlocked at 17. Before the third quarter ended, Yoon answered with a 38-yard field goal attempt to put the Irish back in front.

This consistency, promising for the Irish, held until the fourth quarter.

With just 15 minutes left in the teams’ regular season, Stanford took the field, gained steam and never looked back. In the opening minutes of the quarter, Costello hit Kaden Smith for a 19-yard touchdown, completing a 7-play, 70-yard scoring drive that took just over 2½ minutes and put the Cardinal ahead 24-20. Following an interception of Wimbush which was the first turnover of the game by either team, Costello threw his fourth and final touchdown of the game, this time to Dalton Schultz for 12 yards and a 31-20 Stanford lead. On the ensuing kickoff, Stanford forced a fumble and capitalized on the error with a 4-play, 18-yard touchdown drive, culminating in a 3-yard run by Cameron Scarlett.

As Notre Dame attempted to switch the tide of the match, Wimbush was intercepted on a throw headed for the end zone. With just over five minutes left in the game, the tide was firmly cemented in the Cardinal’s direction. Notre Dame would have one touchdown overruled, and Stanford ran out the clock and sealed the victory with a final score of 38-20.

Playing in front of 47,352 at Stanford Stadium, in temperate Palo Alto conditions in the final regular season game of the year, the Cardinal took the Legends Trophy and wished farewell to any hopes the Irish might have held for one of college football’s most prestigious bowl game assignments.