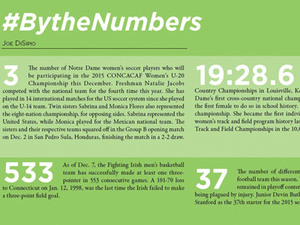 3 The number of Notre Dame women’s soccer players who will be participating in the 2015 CONCACAF Women’s U-20 Championship this December. Freshman Natalie Jacobs competed with the national team for the fourth time this year. She has played in 14 international matches for the US soccer system since she played on the U-14 team. Twin sisters Sabrina and Monica Flores also represented the eight-nation championship, for opposing sides. Sabrina represented the United States, while Monica played for the Mexican national team. The sisters and their respective teams squared off in the Group B opening match on Dec. 2 in San Pedro Sula, Honduras, finishing the match in a 2-2 draw.

533 As of Dec. 7, the Fighting Irish men’s basketball team has successfully made at least one three-pointer in 553 consecutive games. A 101-70 loss to Connecticut on Jan. 12, 1998, was the last time the Irish failed to make a three-point field goal.

37 The number of different starters for the Notre Dame football team this season. The 10-2 and No. 8 ranked Irish remained in playoff contention for most of the year despite being plagued by injury. Junior Devin Butler started at cornerback against Stanford as the 37th starter for the 2015 season.