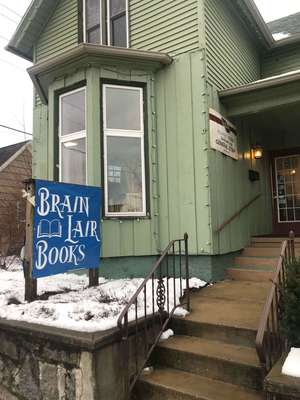 Kathy Burnette, owner and founder of The Brain Lair Bookstore, used to be a tax accountant.

“I’ve always wanted to open a bookstore. About 25 years ago —I have a 25-year-old daughter — and when she was born, that was one of the jobs I thought I would like to do because I thought it’d be fun to raise a baby in a bookstore.”

After two years in accounting and a string of other job experiences, Burnette went back to school to get her degree in education. After teaching at various schools in the area, such as Horizon and Northpoint, Burnette completed a Master’s Degree in library science in order to serve as the librarian at Discovery Middle School. When the principle asked her to revamp the library, she got to play around with the idea of owning a bookstore.

She uses “To Kill a Mockingbird” as an example.

“A lot of times teachers say they use that book because it combats racism,” she said. “If it did, we wouldn’t be where we are right now. So clearly, it does not do that. We have examined the research that shows that the more you consume that type of literature, the more you believe that that’s how it’s supposed to be. It’s not conscious, it’s very unconscious and that’s why we’re still having the same problems, to me at least, it’s based on what we use in schools to teach.”

Burnette got The Brain Lair name from the anagram site that John Green wrote about in “An Abundance of Katherines” in 2007. The small size of the store allows Burnette to handpick her titles and read them so that she can be a trusted source for reading recommendations.

“I wish it was bigger, in the sense that I would like to be a place where kids who want to be activists come and hang out and we develop protests or whatever it is they need to do,” Burnette said.

“I would like to be also a safe space for kids who feel like they don’t fit in where they are and they just need to get away and come do something.”

As the Black Lives Matter movement picked up this summer, Burnette’s small shop saw big business: sales increased by 10 times. Burnette had to close her doors just to be able to satisfy the surge in online orders.

Although Burnette was happy about the increase in sales, she was also a bit skeptical. “ I’m 53 years old. I’ve always been Black, this has always been a Black-owned bookstore,” she said. “It was good that finally people were paying attention, but they were paying attention because they were at home. That wasn’t a new video, this wasn’t the first time that happened, and we know it won’t be the last time this happens, we just were all around to see it. A lot of it I felt was probably performative.”

For those looking to educate themselves, Burnette recommended “Stamped: Racism, Antiracism and You” by Jason Reynolds and Ibram X. Kendi because “it’s written in the language that makes it easy to understand how we got here, like where did this racism thing start.” She also encouraged reading stories about Black people’s daily lives.

“I think we should read more books that just show people of color being people of color, like you and I having a conversation of us going for coffee,” she said. “We need more of what we call Black joy. In schools they do a lot of books where it’s about the struggle, or civil rights, so we tend to think of people that way because that’s what is being reinforced they’re always fighting, they’re always against something.”

And after reading, comes some hard conversations.

“My Instagram, it says difficult conversations in a fun place. I am happy that people bought these books, but now we need to talk about them,” Burnette said.

“We need to go and do something, especially right now I think it’s easy to say that I’m for something, and then not do anything about it.”