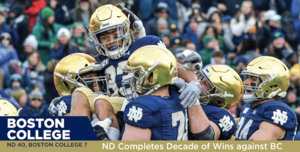 Following a near decade of victories against Boston College in the historic Holy War college football rivalry, No. 16 Notre Dame was looking to secure another win in their final home game of the season.

On Senior Day, the game got off to a slow start with only three points scored in the first quarter. Ian Book opened up the game with a pass to senior wide receiver Chris Finke, but the drive ended with a 47-yard field goal from kicker Jonathan Doerer. The first quarter saw Book flushed out of the pocket several times and scrambling, but the Irish maintained their lead until the beginning of the second quarter.

Seconds into the beginning of the second, Doerer kicked a 29-yard field goal to put the Irish up 6-0. Halfway through the quarter, Boston College managed to move downfield and complete a 40-yard pass to Kobe White into the end zone, but White was marked down at the one-yard line. After Notre Dame stopped Boston College on the following two plays, Dennis Grosel walked into the end zone for the first touchdown of the game.

However, Notre Dame followed up the Eagles’ score with a steady dose of completions to talented playmakers like tight end Cole Kmet and wide receivers Chase Claypool and Chris Finke.With only three minutes remaining in the quarter, Book completed a 6-yard pass to dynamic senior Claypool for a touchdown. With another additional 45-yard field goal from Doerer in the last second of the quarter, the Irish went into the second half leading 13-7.

Boston College received the ball after the half, but their first offensive possession stalled out quickly. Though the Irish’s first drive after the half saw a nice pass and run from Book to Claypool, the Irish stalled which resulted in a punt on their next drive Book threw a 14-yard pass to Finke followed by a reception to Kmet before the drive stalled out again. With just over seven minutes remaining in the third, Doerer completed his fourth field goal of the game. Later in the quarter, a Boston College fumble was recovered by Drew White, giving the Irish back the ball on the first turnover of the game. Notre Dame made the most of the turnover with a touchdown completion to Kmet.

The third quarter ended with Notre Dame’s longest rushing touchdown of the 2019 regular season, with Braden Lenzy running for a 60-yard touchdown, growing the Irish lead to 33-7 heading into the fourth quarter.

Within the first five minutes of the fourth, the Irish had their last score of the game with a 6-yard pass from Book to Finke. With nine minutes remaining in the fourth, sophomore Phil Jurkovec came in as quarterback for the Irish. Jurkovec was stopped on fourth down on the three-yard line and turned possession back over to Boston College. The game ended with senior Nolan Henry quarterbacking for the Irish, with a final score of 40-7.

The Boston College game featured strong performances from several players, including many seniors in the final home game of their career. Kmet became the fourth tight end in Notre Dame history to have 400 receiving yards in a season, and the first to do so since 2013. Book had 66 rushing yards, completing 26 of 40 passes with three touchdowns. Doerer padded much of the Irish’s score with his four field goals dispersed throughout the first and second halves. Alohi Gilman, Ade Ogundeji and Khalid Kareem all had at least one sack during the game.

Notre Dame’s 40-7 win against Boston College in the second to last game of the year continued the home-winning streak and sent the seniors out on a great note.