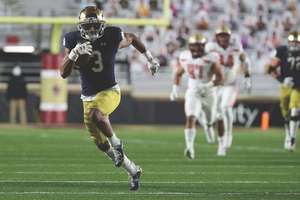 There were many factors to consider before Notre Dame’s game against Boston College: it was only Notre Dame’s third away game of the season, it was quarterback Phil Jurkovec’s opportunity for revenge against his former school, and it took place a week after Notre Dame’s thrilling double-overtime win against No. 1 Clemson. The setting felt eerily similar to the 1993 Boston College upset against the Fighting Irish only a week after Notre Dame’s win in the “Game of the Century” against No. 1 Florida State. Despite Notre Dame being projected as a 13-point favorite, these factors combined to make many Irish fans feel nervous before kickoff.

These nerves seemed well-founded for much of the first quarter. The Irish received the opening kickoff and their first drive covered 70 yards in 13 plays, but it stalled out at the Boston College 5-yard line and ended with a field goal from Jonathan Doerer. In Boston College’s first possession, Jurkovec threw for 51 yards in four passes, ran for an additional 10 yards and capped the drive with a 4-yard touchdown pass. Notre Dame’s Chris Tyree returned the subsequent kickoff to the Notre Dame 19-yard line, but on the first play of the Irish’s second drive, Tyree fumbled a handoff from quarterback Ian Book, resulting in a Boston College recovery. Notre Dame’s defense stepped up and held Boston College to a field goal, but with four minutes left in the first quarter, the Irish were trailing by a touchdown.

Notre Dame’s offense came alive during their third possession of the game. They covered 77 yards in eight plays, with Book completing all five of his pass attempts for a total of 64 yards while scrambling for an additional 12 yards. The drive finished with a 10-yard touchdown pass to graduate wide receiver Ben Skowronek, which tied the score at 10.

Notre Dame remained in control for the rest of the game. The offense scored two more touchdowns and the Irish retained at least a 14-point lead for the entire second half. Despite this convincing performance, Notre Dame made several mistakes. On their first possession of the third quarter, Ian Book completed a 27-yard pass to Skowronek, but Boston College forced and recovered a fumble. Jurkovec threw an interception on the next play to restore Notre Dame’s possession and Doerer also missed a field goal in the fourth quarter.

Overall, Notre Dame played well in this year’s “Holy War” with Boston College. The Irish collected themselves after some early struggles and staged an impressive performance on both sides of the ball. The Fighting Irish went into their next game against UNC with some confidence after their performance, but there were still several facets of the game that the Irish had to improve upon.