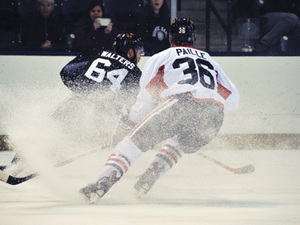 Legacy commands attention, attracts fandom and instills hope. Notre Dame is no stranger to legacy, given its famed football program. Following their third Stanley Cup win in six years, the Chicago Blackhawks have settled into their role as a frosted dynasty.

The powerhouse team drew fans from all over the country, including Patrick Braley, class of ’95,  from Atlanta.

“We used to have a hockey team [The Atlanta Thrashers], but we don’t have the opportunity to see them anymore. This is our one chance a year to come up and do this,” he says.

From the upper level of the arena, the Notre Dame men’s hockey team watched several scrimmages. Notre Dame’s record of 18-19-5 left much to improve upon, and the young athletes looked to incorporate the Blackhawks’ strategies and practice habits into their own play.

“We’re definitely looking to improve a lot on last year, and it’s really cool to have [the Blackhawks] playing in the building with us,” sophomore Peter Mark, a manager for the hockey team, says.

Any team with an established legacy carries with it an expectation of excellence. The Blackhawks face this challenge, in addition to their opponents, as they seek to win another Stanley Cup championship. And it is also a challenge the members of the Notre Dame men’s hockey team hope they can emulate with a successful 2015-2016 campaign.