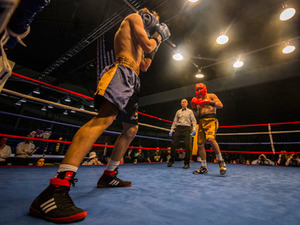 One tournament. Four rounds. Nine weight divisions. 117 boxers. To the outsider, the 2015 Bengal Bouts tournament can seem like a fleeting event, easily summarized by numbers and figures, but that is just grazing the surface of one of the most valued clubs at Notre Dame.

Originally used to train football players in the off-season, Bengal Bouts has evolved into a charity boxing tournament that is the biggest annual benefactor for the Congregation of Holy Cross in Bangladesh. The 2015 tournament marks the 85th year of Bengal Bouts. Senior Captain Evan Escobedo says this year the boxers are asking themselves, “What does 85 years actually mean?”

It means that, for 85 years, thousands of young men have dedicated their time to training, dieting and building the strong bodies referenced in their club’s motto: “strong bodies fight, that weak bodies may be nourished.” It means 85 years worth of schools, health care clinics and churches that have been built for the people of Bangladesh thanks to the funds raised by the tournament.

This year, Escobedo says the Bengal Bouts boxers fixated on the idea that “you look in, you find out what you’re made of — that is strong and worthwhile.  You look at your teammates — there’s a mutual respect. And then you look out to Bangladesh.”

Bengal Bouts has never been about a few minutes of glory for the lone winning boxer at the end of the fights. The glory is earned through the drive, discipline and sacrifice each boxer experiences, contributing their own part to the meaning of Bengal Bouts.

Bengal Bouts concludes Friday with the finals for each weight class beginning at 7 p.m. in Purcell Pavilion.