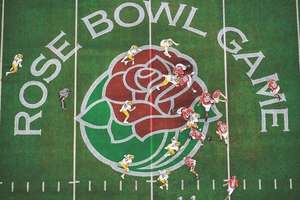 The 2020 football season was one of unprecedented changes for top programs across the country, including the Fighting Irish. The season marked the beginning of Tommy Rees’ tenure as offensive coordinator as well as the departure of Clark Lea, the defensive coordinator, after Notre Dame’s Rose Bowl defeat.

Rees has a long history with Notre Dame. He led the team as quarterback from 2010 to 2013, during which time he tallied a 23-8 record as a starter. After graduating, he broke into coaching, first at Northwestern and then with the Chargers before returning to his alma mater as a quarterbacks coach in 2017.

Rees was promoted to the coordinator role after the team chose to part ways with Chip Long in 2019. In his first season officially calling plays, the Irish had an undefeated regular season, suffering losses only to Clemson in the ACC Championship and Alabama in the College Football Playoff.

One major area of focus for Rees was the run game. Utilizing the most veteran returning line in school history, the offense averaged 211.1 rushing yards per game, the second highest of the Kelly tenure, and 32 yards more per game than last season.

Though the rushing attack took center stage, passing did not fall by the wayside. The offense averaged 237.4 passing yards per game and has joined the 2015 group as one of two squads in the Kelly era to average more than 200 yards both rushing and passing during the season.

Ultimately, the Irish had 448.5 yards of total offense per game, a number on par with the at least 412 yards of total offense averaged during each of Kelly’s seasons as head coach except his first. But Rees’ offense saw a significant decrease in red zone efficiency. This season, the Irish scored on 77% of red zone possessions, scoring touchdowns on 58% — down from last year’s marks of 93% and 76%, respectively.

While Rees potentially has multiple seasons with the Irish in his future, Lea is returning to his own alma mater, Vanderbilt, to serve as head coach. His career at Notre Dame was short and sweet as he first joined the program in 2017 as linebackers coach before he replaced Mike Elko as defensive coordinator in 2018.

In his time at the helm, Lea nurtured one of the nation’s top defenses. In his first two seasons, Notre Dame was ranked in the top 13 in the FBS in scoring defense and among the top 30 in total defense.

In his three seasons with the Irish, Lea’s defense consistently kept opponents under 20 points. The squad allowed only 18.2 points and 17.9 points per game in 2018 and 2019 respectively.

Though that number crept up to 19.7 in 2020, only four teams scored more than 21 points against Notre Dame’s defense.

The Fighting Irish also had three highly impressive defensive displays: keeping Clemson, who scored 43.5 points per game, to 40 points and 34 points in both matchups of the season, and limiting national champion Alabama, who averaged 48.4 points per game, to 31 points.

The end of the 2020 season marked the first time since a stretch in 1969 to 1971 that the Irish finished among the top 15 nationally in scoring defense for three years in a row, a testament to the success of Lea’s defense.

Though many fans were sad to see Lea go, the Irish brought on a promising external talent, Marcus Freeman, to replace him. Freeman, who picked Notre Dame over another offer from LSU, was formerly defensive coordinator at Cincinnati, where Kelly previously served as head coach.

Cincinnati ranks fifth in scoring defense, ninth in total defense and 17th in rushing defense. Many expect Freeman to elevate recruiting at Notre Dame because in the past two seasons Cincinnati has posted the top two recruiting classes in the AAC and has had three classes ranked in the top 50 nationally in the last four cycles.

As Kelly pointed out, Freeman is well-respected for his recruiting abilities — a talent that may be even more valued by the Irish as they look to close the talent gap with top teams.

“The work Marcus has done elevating the programs he has been a part of speaks for itself, but equally as important is the exceptional work he has done in building relationships with his staff and players,” Kelly said in a statement released to the public, adding that Freeman “was our top choice to become our next defensive coordinator.