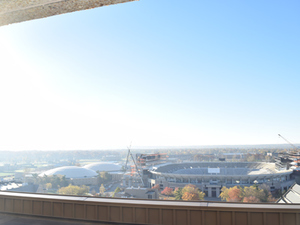 With a red Starbucks cup clutched in your hand and a filled-to-bursting backpack slung across your back, you have one mission: the perfect library study spot. As you wind your way around the first floor, following yellow directional arrows, you hear a murmur of voices: enthusiastic freshmen discuss their weekend plans, focused sophomores study Orgo, and many others sit silent, heads buried in their laptops. At last you reach the elevators, buried in the far back corner of the library. With a ding, the elevator doors slide open. You step inside and for a moment your eyes linger on the number 14. There is a small spot for a key, and it is turned to the locked position. You wonder what secrets the 14th floor holds as you push the number 12 and the doors whisk closed.

If you have ever tried to push the button for the 14th floor, you will know that it does not do anything. You need the key and the top floor has its own alarm, so even if you somehow managed to find your way up there on your own, you would not have a chance to look around.

The Office of the President manages all requests relating to the President’s Lounge, the official name of the 14th floor of the Hesburgh Library. The space is often referred to as “the Penthouse” and boasts a spectacular panorama of campus. As the doors to the elevators slide open, a rich carpet is visible, as are curving double doors, foregrounded by the Notre Dame seal. A podium stands waiting for a speaker, as images covering the university’s history adorn the walls.

The room holds approximately 110 people for a seated dinner and 150 for a standing event. A paved walkway runs around the Lounge, with a 360-degree view of campus.

To the south, the stadium and the Campus Crossroads construction are visible, as well as the domes of the Joyce Athletic Convocation Center. The stadium was built in 1930.Knute Rockne only coached one season there before his tragic death. Nevertheless, it is affectionately called “the house that Rockne built.” Today, thanks to a 1997 stadium expansion that included the addition of the upper bowl, the stadium holds 80,795 people. The Campus Crossroads project is expected to add an additional 3,000 to 4,000 seats and bench space will increase from 16 to 18 inches per person.

Downtown South Bend and South Quad are all visible as you turn the corner. Not far from the flag pole on South Quad, near the statue of Father Sorin, stands an old tree with a ring in. It was once used to tie horses to, back when the Knights of Columbus building served as a post office. The ring no longer moves, but it is still visible, even though the tree has partially grown around it.

Moving towards the west, it is possible to see the Dome and Basilica, which serve as the main backdrop for the Lounge. Main Building is the second tallest building on campus, standing at 187 feet tall, including the 19-foot-tall statue of Mary. The Basilica is the tallest building on campus, standing 230 feet tall, reflecting the idea that nothing should come before God. The spire of Le Mans Hall at St. Mary’s College is visible in the distance, as well as Holy Cross College.

The Moreau Seminary can be seen as you turn the corner, just across St. Joseph Lake. The stained glass windows of the Chapel are not evident from the outside, but a bench used to stand in front of it, where Rudy opened his acceptance letter from Notre Dame.

The Fighting Irish signs above the LaBar Practice Complex are also fully visible as well as the two domes of the JACC. Inside, hidden from view is a large, full service kitchen for events. Food is often brought over from the Morris Inn, but the kitchen is fully equipped for events held in the Lounge.

You may not find yourself with access to the 14th floor of the Hesburgh Library anytime soon, but if you are interested in seeing what the views are like, you can visit library.nd.edu/about/secrets.shtml to look at campus from the Penthouse.