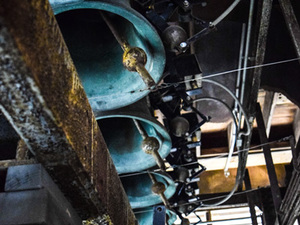 The Basilica of the Sacred Heart is one of the major landmarks on campus, second only, in many eyes, to the Dome. With a rising spire, exquisite stained-glass windows and a masterfully painted interior, the Basilica is a testament both to the central role of faith life at Notre Dame and Fr. Sorin’s vision. Despite its prominent place on campus, it still holds many wonders to discover in tucked away alcoves, high above the church ceiling and deep in its foundations.

The Basilica is the tallest building on campus, the top of the bell tower standing at 218 feet tall. It stands in the shape of a Latin Cross and contains 44 large stained glass windows, which have 114 life-sized pictures of saints and 106 smaller scenes. Construction on the current Basilica, which replaced the “Old Church” of the Sacred Heart, began in 1870, and the stained glass windows, which were made by Carmelite nuns in Le Mans, France were produced in the 1870s and 1880s.

Luigi Gregori, a painter for Pope Pius IX and art professor at Notre Dame, painted the 56 murals and Stations of the Cross during the 1870s. Priests, faculty, students and members of Gregori’s family served as models for the figures he painted. On Jan. 17, 1992, Pope John Paul II designated the church a minor basilica, which is a special designation given by the Pope to churches because of their antiquity, dignity, historical importance or significance.

The bell tower of the basilica contains an eight-ton bourdon, or brass bell, in addition to the oldest set of carillon bells in North America. Each day the bells play the alma mater at 9 a.m. and 10 p.m. Since early in the university’s history students had 10 p.m. bed checks. In December, the bells play Christmas carols, which are preprogrammed like the other daily songs.

The Memorial Door, bearing the words “God, Country, Notre Dame,” was constructed in the mid-1920s to remember the students who passed away during World War I. The two panels flanking the door bear the names of every student lost during the war.

In a façade there are two niches which now hold statues but were empty during the war. “Very few students were taking art classes because they were being commissioned as officers, so the art faculty decided to fill in the niches with Archangel Michael, the patron saint of those in the military, and Joan of Arc, patron saint of France, where the students had lost their lives,” Rev. Peter Rocca, C.S.C., says.

The area between the doors also has special significance. “When you go through the doors, the ceiling is painted with the regiments that the students belonged to, and the light fixture is the helmet worn by Fr. Charles O’Donnell, who served as a Chaplain during WWI. He wrote the words to the alma mater, which was sung for the first time at Knute Rockne’s funeral,” Rocca says.

The Lady Chapel, located behind the main portion of the altar, was constructed between 1886 and 1888 to celebrate the 50th anniversary of Fr. Sorin’s ordination as a priest. Among the figures on the ceiling is St. Patrick, who was added by Gregori at the students’ request. The colors of the paint on the ceiling are purposely duller than the rest of the Basilica to avoid clashing.

“Fr. Sorin was very much an Americanist. He loved the church in America because it was dynamic and not burdened by old world traditions. He was free to think big, and that’s how Notre Dame became what it is,” Rocca says.