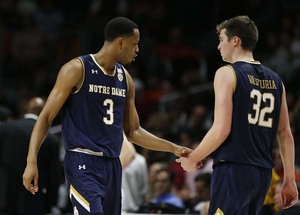 Steve Vasturia and V.J. Beachem have enjoyed memorable four- year careers for Notre Dame, and their graduation this coming May will serve as a reminder of the culture of sustained success embodied by Notre Dame basketball.

“It’s been awesome [playing with Beachem for four years],” Vasturia said after the team’s March 1 win over Boston College on Senior Night. “It’s really nice to play with a guy who always wants to get better and wants to win. I’ve really enjoyed playing with him, and I know we’ve gotten close. Since we got here, we’ve been having a lot of success together.”

Beachem added, “To get a win with my brothers for the last time on this court, it was great. It’s a great feeling.”

In today’s college basketball landscape where the “one-and-dones” and “diaper dandies” dominate media attention in their freshman year, Notre Dame’s coaching staff prides itself on winning games, not impressing the cameras. The senior leadership of Vasturia and Beachem — along with Austin Torres, who will return for his fifth year in 2017 — has been a constant in a sport where such commitment among players is as rare as head coach Mike Brey wearing a tie. (Spoiler alert: It hardly ever happens.)

Brey has amassed 382 wins during his 17 seasons at Notre Dame, which is one indicator of the program’s continued success. More impressive, however, might be the team’s performance in the postseason. In the last three seasons alone, the Irish have won a total of seven games in the NCAA Tournament, more than in Brey’s previous 14 seasons combined at Notre Dame.

Vasturia, meanwhile, took on a significant role by his sophomore year, starting in all 110 Irish games over his final three seasons. Vasturia scored 10.2 points per game, with the number climbing to 11.5 in his starts.

Notre Dame ranks near the bottom third of teams in pace of play, meaning they slow the game down and consequently average fewer possessions per game than over half of teams in the NCAA. Standardizing and adjusting Beachem’s and Vasturia’s stats to account for pace reveals that, while their standard per-game outputs might not be among the national leaders, they have been extremely productive and crucial to the success of the Irish.

“There’s the utmost respect [for Vasturia and Beachem],” Brey said. “One of the things that I’m really proud of about this program, on these Senior Nights: the underclassmen have felt very responsible to send those seniors out on a good note. They want it bad for the guys, and it was no different with this group. That’s who our program is.”

Fans may also remember some of the spectacular performances that these two have enjoyed in the last 12 months. Beachem provided a spark to the Irish in the 2016 postseason when they needed it most, leading the team in wins over Duke (during the ACC Tournament), Michigan and Wisconsin (NCAA Tournament First Round and Regional Semifinal, respectively). He also added a highlight-worthy dunk in Notre Dame’s eventual loss to North Carolina in the Regional Final.

This season, Vasturia was most dangerous late in games, especially in ACC play. In addition to tying for or holding the outright team lead in scoring in seven games (six vs. ACC opponents), Vasturia sank a game-winning three-pointer with seconds remaining in overtime at Pittsburgh on Dec. 31 (2016). Just days later, “the baby-faced assassin” (a nickname given by voice of ND Radio Jack Nolan) sealed Irish victories with late baskets at home versus Louisville and at Miami, leading Notre Dame to its best start to conference play in school history and best start overall during Brey’s tenure.

Vasturia also rewrote a piece of Notre Dame history with his success at the free throw line. Only one other Irish player, Ryan Hoover (1993-94), had ever shot above 90 percent on free throws for a whole season. During the 2016-17 season, Vasturia surpassed Hoover’s 90.5 percent clip with a 91 percent mark. Furthermore, Vasturia’s 85.3 percent career free throw percentage is second in school history behind Chris Thomas ‘05 (86.8 percent).

As these two graduating seniors pass the torch to the next group of seniors — Bonzie Colson, Matt Farrell, Martinas Geben and Matt Gregory — their presence both on and off the court will surely be missed. It is never easy to lose the experience of veteran players who have developed and improved during their college careers, and following the example set by these two soon-to-be-alumni might seem daunting for the underclassmen. Moreover, the team will also have to find a way to adjust after the departure of sophomore Matt Ryan, who recently announced his plans to transfer before his junior season. This university, however, is built upon tradition, and those who come after Beachem and Vasturia will have two exemplary leader to emulate.