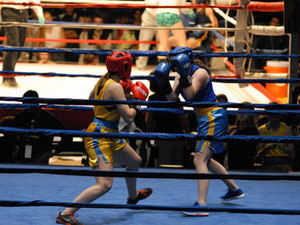 BOXING FOR A GREATER GOOD Barka Bouts raises money for a school in Uganda run by the Holy Cross Congregation.

"Baraka” comes from the Swahili word that means “blessing, prosperity or opportunity.” It is this chance to be a part of prosperity that has attracted a record-breaking number of participants for Baraka Bouts. This year, Baraka Bouts, the female boxing tournament fundraiser, has registered 265 boxers, 140 of which will fight in the tournament, surpassing its more established brother counterpart Bengal Bouts for the first time ever.

The central goal of Baraka Bouts is to raise money for Lakeview Secondary School in Jinja, Uganda, run by the Holy Cross Priests. In its 14 years of fights, the tournament has raised thousands of dollars devoted to improving the school conditions and providing scholarship funds for students.

Maeve Donovan, a junior at Notre Dame and team captain, initially chose Baraka Bouts as a way to stay in shape, but has stuck with it for three years now because of the organization’s mission.

“I never knew I would fall in love with both the sport and the mission of Baraka Bouts as much as I have,” Donovan says.

Senior Erin Bishop similarly raves of her experience as a first time fighter this season.

“It is incredible to train so hard with other girls while at the same time knowing that we are all working toward the same goal, to raise money for Holy Cross Missions,” Bishop says.

This year, the Wolohan Family Foundation will play a huge part in helping the boxers reach that goal by matching every dollar the boxers fundraise. With the funds, the Baraka Bouts team hopes to sponsor the building of a new academic building and a women’s dorm.

“It is a great feeling to know that although we are all competing, we are all fighting for the same purpose,” Bishop says.