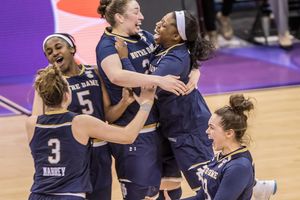 The Notre Dame women’s basketball team was not supposed to win a national championship last year, but they did. With only seven scholarship players available for the tournament due to the many injuries the Irish faced during the regular season, Muffet McGraw added to her impressive resume by leading the Fighting Irish to the title. Oh, and Arike Ogunbowale happened.

After a back and forth game with UConn in the national semifinals, Ogunbowale hit the first of two improbable, and simply miraculous, shots that advanced the Fighting Irish to the national championship game against Mississippi State. In another close contest, Ogunbowale made what may go down as the most memorable shot in Notre Dame’s illustrious history to win the national championship. It took a long season full of injuries, adversity and more hard work than imaginable to reach to the hoisting of that trophy in April.

The Fighting Irish began the year on a tear, facing one of the most daunting nonconference schedules in the country. In a five-game span, the team played four top 25 opponents (Oregon State, South Florida, South Carolina, Michigan) and came away with wins against all of them.

After these convincing wins, no one in the country could argue that the Fighting Irish were truly a force to be reckoned with. After suffering a loss to the No. 1 UConn Huskies in a preview of the Final Four game, the women went on an eight-game win streak before the real challenge set in.

Sitting at 15-1 with a 4-0 record in ACC conference play, Notre Dame traveled to Louisville for yet another top-ten showdown. To say the Irish were unprepared for what would happen that night would be an understatement. They got trounced by a score 100-67. The loss came at a pivotal time, and it refocused the team.
After only one more loss (to Louisville in the ACC Championship game),

the Fighting Irish earned yet another No. 1 seed in the NCAA Tournament and breezed to the Final Four by an average margin of 15 points. The rest is history, and another banner will hang in Purcell Pavillion come this season.

This is a new season full of new challenges; this time around, the Irish will be the hunted rather than the hunter. As the reigning national champion, everyone will be trying to dethrone them. Notre Dame will be ready for these challenges, McGraw always guarantees that.

The Irish have the makings of a truly dominant team as they return the top five scorers from last year’s squad, return everyone from injury and add a highly rated recruiting class. With the expectations set so high, this year’s squad has the perfect blend of talent, experience and coaching to contend for another national championship.

With two top-ten matchups on the nonconference slate (UConn and Tennesee), a host of other top-25 matchups (DePaul, Iowa and Marquette) and the always daunting ACC schedule, the Irish will face many challenging opponents before the tournament even begins. Although UConn lost their best player, Azurá Stevens, head coach Geno Auriemma landed two of the top five recruits and always has his team ready to compete for a national championship. The matchup of UConn and Notre Dame at Purcell Pavilion could surely be a preview of a Final Four matchup or the national championship.

Despite the always formidable schedule, the Fighting Irish have the potential to be the most dominant team in college basketball and win a second national championship in as many years.